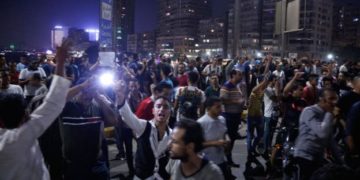 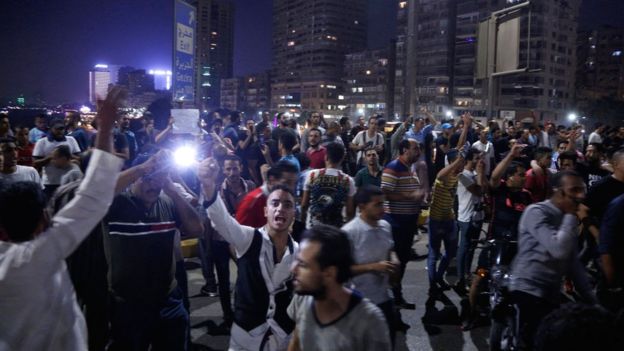 Right groups in Egypt say more than 1,000 people have been arrested over ongoing anti-government protests.

Last Friday marked the start of street protests organized by Egyptians, signaling a major shift in how people feel about the al-Sisi government.

Since 2014 when al-Sisi took over, there have been hardly any public out-pour of protests against his government.

On Friday, tear gas was fired at protesters to disperse them when they gathered at Tahrir Square in Cairo.

The square is a key site of the 2011 Egyptian Revolution with the protesters demanding al-Sisi’s resignation.

The arrests according to right groups were intended to intimidate protesters and keep them mute as agitations grow against the government.

Three renowned political activists and critics of the president are among those arrested by security forces.

Defense lawyers of those arrested say their clients are facing probes for the alleged use of social media to spread false news.

They are also being investigated for spreading information to undermine national security, joining a banned terrorist group, and protesting without a permit.

An Egyptian businessman and actor, Mohamed Ali is credited with sparking the latest wave of protests.

He has accused al-Sisi of wasting millions on luxury residences and hotels while Egyptians live in poverty.

President Sisi has dismissed the allegations as “lies and slander”. Demonstrations have been held in Egypt’s second-largest city, Alexandria, as well as in Suez.

There were protests also in the town of Mahalla el-Kubra which is north of Cairo.

Al-Sisi was first elected in 2014, nearly a year after leading the military overthrow of Egypt’s first freely elected president, the Islamist Mohammed Morsi amid mass protests.

In 2018 he won a second term after being re-elected in a vote in which he faced no serious challengers.

This year Egyptians also voted to approve constitutional changes that could extend Sisi’s term in office until 2030.

He now faces the real test of his presidency with the emergence of protests.