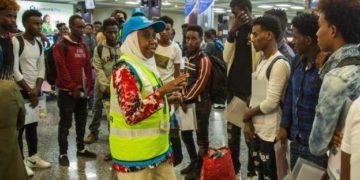 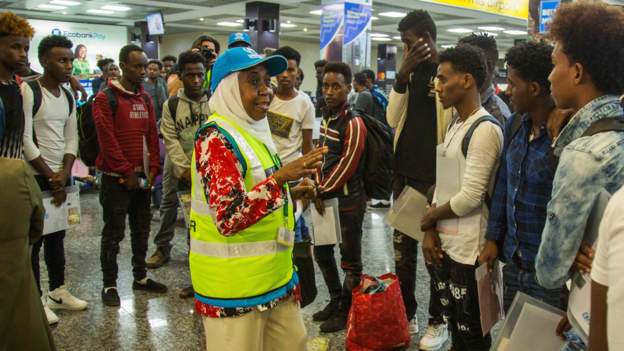 The first batch of African migrants stranded in Libya detention camps has arrived in the Rwandan capital of Kigali.

The sixty-six migrants are part of the over 500 migrants Rwanda has agreed to take.

The migrants are relocating to Rwanda following an agreement between the Rwandan government, the UN refugee agency (UNHCR) and the African Union.

Many migrants from Africa continue to seek for greener pastures outside the continent.

They have resorted to the north of Africa as a transit point with some risking their lives through the Mediterranean Sea.

Some of these migrants are also abused by traffickers and sold into slavery.

The UNHCR said in a tweet on Thursday that the first batch of migrants arrived that day.

“Special thanks goes to all the people of Rwanda who have been sharing heart-warming welcome messages all day long,” it said.

All refugees arrived to Kigali airport safe and sound & are being welcomed by UNHCR staff and local authorities.

Special thanks goes to all the people of Rwanda 🇷🇼 who have been sharing heartwarming welcome messages all day long. pic.twitter.com/tfa5vFNxwy

The first group includes many unaccompanied children, single mothers and families – some of whom are from the Horn of Africa.

The youngest passenger was a two-month-old girl born to Somali parents, the UNHCR said.

🎀 The youngest passenger on the flight to Rwanda.

Hadia, ‘gift’ in Arabic, is a 2 months-old little Somali girl born at the Gathering & Departure Facility.
Tomorrow she will wake up in a safe place in Rwanda 🇷🇼 together with her 2 young parents.

We wish them a bright future. pic.twitter.com/UZWqvwSyTj

The migrants will be staying at Gashura transit centre, about 55km (34 miles) south of the capital, Kigali.

In 2017 the African Union said it had planned to evacuate about 15,000 of the migrants but no progress was made in that regard.