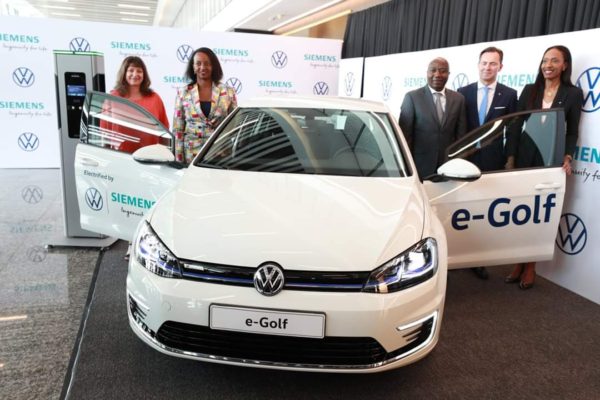 German car producer Volkswagen has teamed up with Siemens to launch electric vehicles in Rwanda.

The launch on Tuesday is part of the e-Golf project, making Rwanda the first African country where Volkswagen is testing electric cars.

During Tuesday’s launch four of the electric cars were unveiled and available on the local market.

There is only one charging station for these cars located at the Volkswagen facility at the Special Economic Zone.

Volkswagen officials say more cars will join the market in the coming months to bring the number to about 20 cars and 15 charging stations across the city.

The electronic car will be of the Volkswagen Golf Model will be produced in Germany and imported to Rwanda.

But Siemens role in the partnership will involve setting up charging stations for the cars.

Thomas Schaeffer who is Managing director of Volkswagen South Africa said his outfit “wants to be part of Rwanda‘s transformation. Rwanda’s success is VW’s success. Rwanda has the potential to leapfrog combustion engines”.

He adds that “we are confident that the feasible study that is being conducted by Volkswagen and Siemens under this pilot project, will yield positive results, enabling the arrival of more e-golfs.”

Michaella Rugwizangoga, the Chief Executive Officer of Volkswagen’s operations in Rwanda had said the cars are fully electric, not hybrid.

Just in case you wondered…

Inside one of the new e-Golfs that were launched in #Kigali today.

The interior is fitted with the latest technology to give drivers comfort and a good experience behind the wheel. @VWRwanda @SiemensMobility pic.twitter.com/BXSYXvKrQK

The largest European manufacturer, Volkswagen has targeted 5,000 vehicles from its Kigali assembly plant in Rwanda.

The care-marker has already started producing “Made in Rwanda“ vehicle brands assembled in Kigali.

The plant has produced “Polo” brand vehicles, but due to demand, the manufacturer is produced other models including Passat, Tiguan, Amarok and Teramont.

VW Polo model, the most affordable of the locally-assembled option costs $23,881 all taxes included.

Creating a market in Africa is key for the company. Volkswagen already builds vehicles in Kenya.