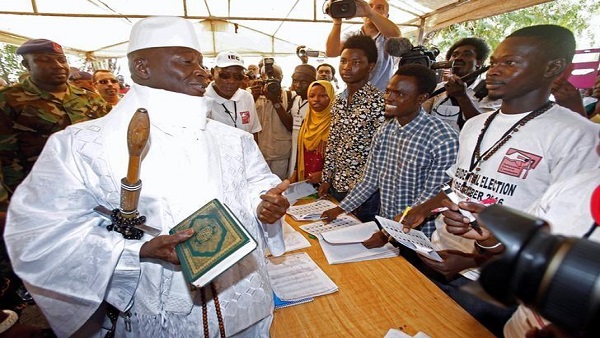 The campaign for the return of Yahya Jammeh to the Gambia is gathering storm despite moves by the Barrow government to prosecute him.

The country’s Justice Minister has hinted that the former president must be charged for stealing over $1 billion and the atrocities he allegedly committed whilst in office.

But his sympathizers and supporters of his party the APRC are unperturbed as they push for Jammeh’s return to the country.

Ousman Rambo Jatta, the Deputy leader of the Alliance for Patriotic Reorientation and Construction announced that Jammeh is coming home in accordance with the agreement with the government.

He said any properties that was seized from the former president by the Barrow government will be recovered.

“When  they came to power, they seized all our assets, these assets belong to the party APRC, they forcefully took Yaya Jammers’ asset but Jammed will be back soon and he will take all the properties they took from him,’’ Jatta said at a rally last week.

Mr Jatta threw a jab at the lead counsel at the Truth and Reconciliation Commission for allegedly bribing witnesses to testify at the truth commission.

The commission is hearing cases of atrocities committed under Yahya Jammeh.

Fabakary Tombong Jatta the interim leader of APRC stressed that the home coming of Yaya Jammeh is inevitable.

He said the former president is a Gambian and has every right to return home when he desire.

“Whether they like it or not Yaya Jammeh will come back to the Gambia and no one can stop that, even if it would take half of the country to die he will come back” said Jatta.

Omar Colley an ardent supporter of Jammeh told Africa Feeds that the only person can save Gambia from sinking and that is Jammeh.

“People forget so soon, a man has transformed the lives of many Gambians but now they turn their back against him.

He will surely come back soon and we are working towards that. The campaign for the home coming of Jammeh is real and we want to see Jammeh back home and I am sure Gambians missed him.”

Mariama Badjie a 28 year old told Africa Feeds that APRC will soon take the country again come 2021 they will sweep the polls.

“Look at the crowd in the mega rally and tell me this is a weak party, when everyone doubted us we prove them wrong.

So we are very much prepared to welcome our supreme leader Yaya Jammeh sooner than later in the country.

The Barrow government has failed in totality and we will take over soon” she said.

Jammeh is presently living in Equatorial Guinea after losing the 2016 elections to Adama Barrow.