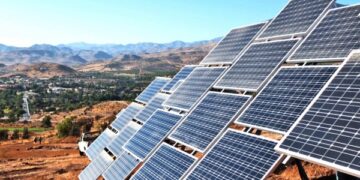 Ghana’s President Nana Akufo-Addo on Tuesday cut the sod together with German Ambassador to Ghana Christoph Retzlaff for the construction of a 17 MW Solar Power Project.

The project fully funded by the German Government was unveiled at a festive ceremony at Kaleo in the Upper West region of Ghana.

In the context of the bilateral Reform and Investment Partnership between Ghana and Germany, German Development Cooperation is providing funds via KfW to the amount of EUR 22.8 Million to finance the project.

The Reform and Investment Partnership between Ghana and Germany, through the German Federal Ministry for Economic Cooperation and Development (BMZ), was launched in 2017 as Germany’s bilateral contribution to Ghana of the G20 Compact with Africa.

The project will be implemented at Kaleo and Lawra in the Upper West Region.

The sites will provide a capacity of 13MWp and 4MWp respectively which allows Ghana’s Volta River Authority (VRA), the commercial owner of the plant, to increase its share of renewable energy in the energy mix by 85%.

This 17MWp Solar Power Project can be considered a role model as it not only proves the great potential for renewable energy projects in Ghana but also the commitment of the Ghanaian Government to increase the overall share of renewable energies in the energy mix.

As the Project is the first of its kind in the Upper West Region, it will boost the region’s electricity supply, create jobs and open new development perspectives for the people living in the Region.

According to the current schedule the plant will be commissioned for operation late December 2020.

Over 3,000 prisoners pardoned by Algeria's president