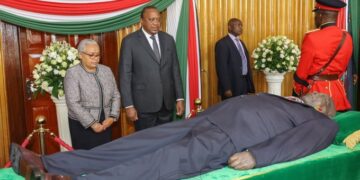 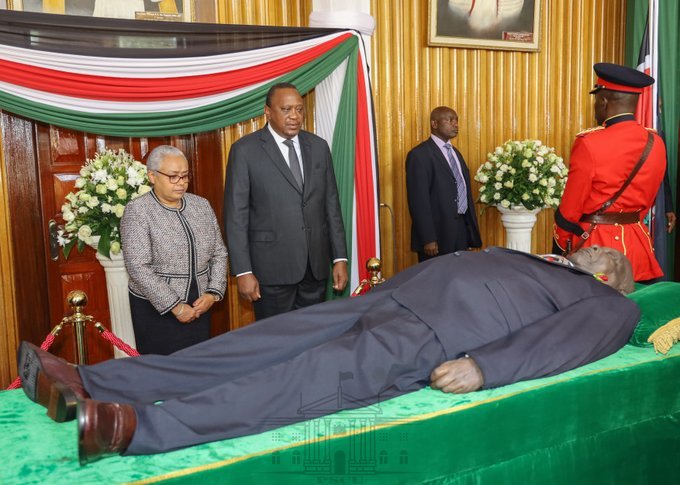 Former President Moi will lie in state until Monday.

Kenyans have started lining up to view the body of former president Daniel arap Moi as it lies in state until Monday.

Many of them have thronged the country’s Parliament Buildings to view and pay their respects.

Kenyatta paid tribute saying Moi was a “tactful leader, who during the quest for a new constitutional order, listened and quietly chose what was best for the country.

A visionary leader who, in 2002, when his party – and, I as their candidate – lost the Presidential election, left office with a gracious last word of advice to those who, thereafter, took up the heavy responsibilities he had borne for a quarter of a century.”

He ended saying “We commit Mzee Moi’s Soul to the Almighty God, thanking the Creator for sending to us His Servant, whom after nearly a century of selfless and steadfast service, now rests in His Glory and his well-deserved reward.”

4/4 The President, who was accompanied by the Deputy President and other senior state officials, later proceeded to Parliament where he led the nation at the start of the three-day public viewing of the body of the former President #FarewellMoi | @WilliamsRuto pic.twitter.com/ZgjhnTsawg

President Daniel arap Moi who died at the age of 95 was Kenya’s longest serving president.

Moi who ruled Kenya for 24 years died on Monday after being in hospital for weeks.

The country is observing a period of national mourning until the day of his funeral.

Moi replaced Kenya’s first President Jomo Kenyatta after his death in 1978 and rallied Kenyans to join in building the country.

But after a failed coup plot to overthrow him Moi gained notoriety for clamping down on freedoms and torturing opposition politicians without trial.

“The question that we should all ask ourselves is how does one mourn an iconic leader? A leader who spent almost his entire life in the service of our nation and whose story of heroism, sacrifice and service begun in the pre-independence era” – President Uhuru Kenyatta pic.twitter.com/bhRGnnewtl

In view of the associated sanctions Moi organized elections but won won back-to-back  in 1992 and 1997.

When his two terms ended in 2002, Moi favoured Uhuru Kenyatta as his successor but Uhuru lost by a landslide to an opposition coalition led by Mwai Kibaki.