The Zambian using skating to change mindset among young people 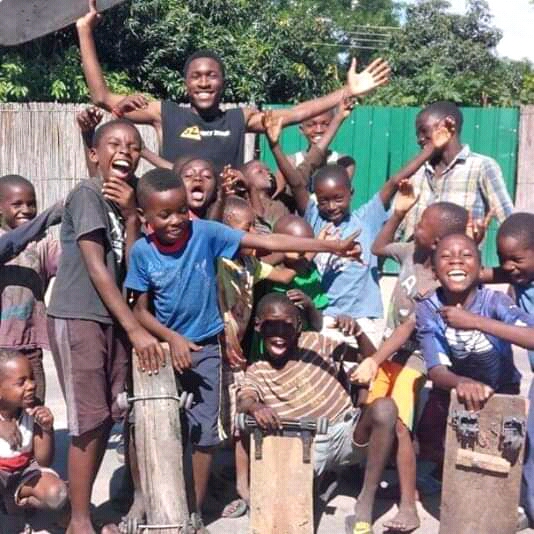 A 12-year-old girl died on Sunday from wounds sustained when gunmen stormed a school in the South West Region of Cameroon on Saturday and...
Read more
Special Reports

Tension is high in Guinea with some streets reportedly deserted as security forces patrol them to contain a post election violence. Supporters of the opposition...
Read more
News

The opposition in the Seychelles has won the country's presidential election for the first time since 1977. Wavel Ramkalawan, an Anglican priest defeated incumbent President...
Read more
News

The Nigerian presidency has said that at least sixty-nine people have been killed so far across the country in protests against police brutality. A spokesman...
Read more

To many youngsters, Skateboarding is just a pastime activity, but for 20 year old Johnny Kalenga, of Mongu town, in the Western province of Zambia, who is an activist passionate about positively changing the mindset of the kids in his community, the sport is a powerful tool for driving that agenda.

Through Skateboarding, he is also able to help kids in need, to acquire basic supplies, such as food.

For about five years now, Kalenga has used this talent to keep some young people in his area, away from unhealthy habits such as binge drinking and crime, teaching them how to skate and providing recreation, as the lack of it, he says, contributes to negative behaviour.

“Seeing how much [the] lack of recreational facilities was affecting the youths in a very negative way, I started to teach them how to skate,” Kalenga says.

He was only 15 when he started a skating academy, called ‘WeSkate Mongu’, which was initially just him playing around with the kids, in 2015, but over time, other young people came to join in.

Today, he has over 30 members, with whom he recently was able to host the first ever Skateboarding Tournament in the town.

The event which was hosted on the 14th of March, 2020, as part of Youth Day celebrations, raised over 600 US dollars and Kalenga and his group plan to donate the proceeds to charity.

“We are planning to buy shoes, clothes, school supplies and feed more than 100 kids,” says Kalenga, adding that the kids would be given such foodstuffs as mealie meal and cooking oil to take to their homes.

Kalenga casts his mind back to when he started and shares some of the challenges he faced.

“At first it was easy because I started off with about five to seven students, then things started to get hard when I started having about 15 students.

It was difficult to do because I only had one skateboard for all these eager children who [were] new to the sport and love[d] it so much.

I didn’t stop because this was bringing about, positive change in my community so I continued,” he recollects.

His persistence paid off, as well-wishers heard of his good deeds and started helping out, resulting into more young people joining in. But as the numbers grew, so did the challenges.

“Fast forward to 2018 we receive our first donation of eight skateboards from the skate community in Sweden. The class grew bigger to 30 plus students and the job was getting even tougher. Most of the kids got tired of taking turns so they started showing up to the lessons with self-made Skateboards from planks and suitcase wheels,” Kalenga recalls.

It was that willingness of the kids that propelled him to continue teaching them and with time, other support started coming-in.

“Fast forward to early 2019, an English guy by the name of Kingsley Ngenda came across our Facebook page and he was interested in it, because his dad was born in Mongu, then moved to the UK.

“He flew all the way from Manchester to come [and] see us in Mongu, and he brought about eight Skateboards and some of them are the ones we are using currently,” he adds.

The creation of his group’s Instagram account also helped to reach over 40 thousand people worldwide most of them being in USA, UK, German, Spain, Sweden, France and a few in Zambia.

“This has seen us get a lot of donations, some are yet to be sent,” says Kalenga.

Kalenga’s commitment to skateboarding has not only earned him Skateboards donors, but also, partnerships locally and internationally.

“I was invited to South Africa by the biggest organization working on social skateboarding projects which is Skateistan. I was the only Zambian there presenting my project. Ever since, we are currently in partnership with one of the biggest skateboarding online community that is doing a project for us raising money for WeSkate Mongu to function,” he notes.

According to Kalenga, the academy also caught the attention of a Moroccan filmmaker, who visited and shot videos of their activities, with the hope of releasing a film called ‘Zambian Skate Scene’.

Going forward, Kalenga has a number of other ideas to expand his contribution to the well-being of his community.

These include building a skate park or/and a recreational centre for kids.

“We are working towards getting the skate park built in Mongu, so that crime among youths can come to an end. Our future goal is to create a recreational facility where kids will feel safe, stay out of trouble and be taught valuable life lessons,” he claims.

He adds that the academy would further incorporate skateboarding in education, where kids would be helped with their homework, such as in English and Math lessons.

Ahead of matches yet to come both European and domestic, Premier League giants Manchester City have been issued a blow to their team as...
Read more
Sports

Cristiano Ronaldo tests positive for COVID-19 for the Second time

Portugal international and Juventus forward Cristiano Ronaldo is reported to have been tested positive for Covid-19 for the second time is will be facing...
Read more
Sports

The summer transfer window this year was very quiet for Spanish giants Real Madrid as they invest in bringing in a new player to...
Read more
- Advertisement -

A 12-year-old girl died on Sunday from wounds sustained when gunmen stormed a school in the South West Region of Cameroon on Saturday and...
Read more
Special Reports

Tension is high in Guinea with some streets reportedly deserted as security forces patrol them to contain a post election violence. Supporters of the opposition...
Read more
News

The opposition in the Seychelles has won the country's presidential election for the first time since 1977. Wavel Ramkalawan, an Anglican priest defeated incumbent President...
Read more
News

The Nigerian presidency has said that at least sixty-nine people have been killed so far across the country in protests against police brutality. A spokesman...
Read more
News

The warring factions in Libya have signed an agreement for a permanent ceasefire to end the years of violence. The agreement was reached in Geneva...
Read more
- Advertisement -
Africa Feeds

A coronavirus vaccine trial participant has died. The volunteer was involved in trials into a jab from Oxford University and pharmaceutical company AstraZeneca. The tragic news was confirmed...
Read more
News

Nigeria's Vice-President, Yemi Osinbajo has said those killed in the past days during the ongoing protests against police brutalities will get justice. He made the...
Read more