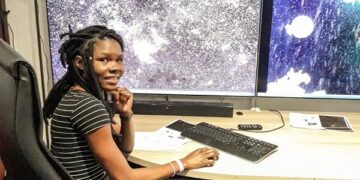 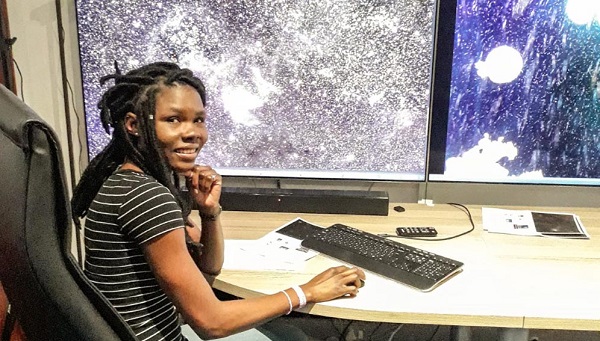 Marie Korsaga in 2019 emerged as the first female astrophysicist in West Africa.

She earned this accolade after completing her PhD in astrophysics at South Africa’s University of Cape Town.

Marie Korsaga who is from Burkina Faso studied for her PhD on the theme ‘The distribution of dark and visible matter in spiral and irregular galaxies’.

She earned her PhD after seven years of intense research on the subject.

In a recent interview with SciDev.Net Korsago revealed that she always wanted to understand the phenomena of the universe and a desire for lunar missions.

She said “from an early age, I have always been interested in the phenomena of the universe, such as the appearance of life on earth and shooting stars.

I also enjoyed watching documentary films on astronomy, especially on the Apollo missions. But at the time, I never imagined that I would become an astrophysicist, because astronomy was an unknown domain in Burkina Faso. Besides, I had never met — let alone talked to — an astronomer in real life before my doing my degree.”

Helping the next generation

Korsago wants to share her new knowledge with other girls, hoping to inspire women to pursue studies and careers in science.

She explained that “It’s true that studying in a scientific field as a woman is a bit complicated. For example, during my career I faced comments such as “physics is too complicated for a woman, you will not be able to make a career in the field”, or even “you risk going crazy if you continue”.

I intend to contribute to the training of young people in science in Burkina Faso and in Africa generally by providing courses in universities.

I also plan to take action to popularise science education in general, and astrophysics in particular, in countries where access to science is limited — to motivate young people to take up scientific studies, especially young girls.”

Who is an astrophysicist?

All this is what makes people describe astronomy as the mother of all sciences. As well as being fascinating as a science, astronomy can be used as a development tool through, for example, education and tourism.

The International Astronomical Union understands this and is trying hard to address the development component in developing countries, working to achieve the UN’s Sustainable Development Goals.”