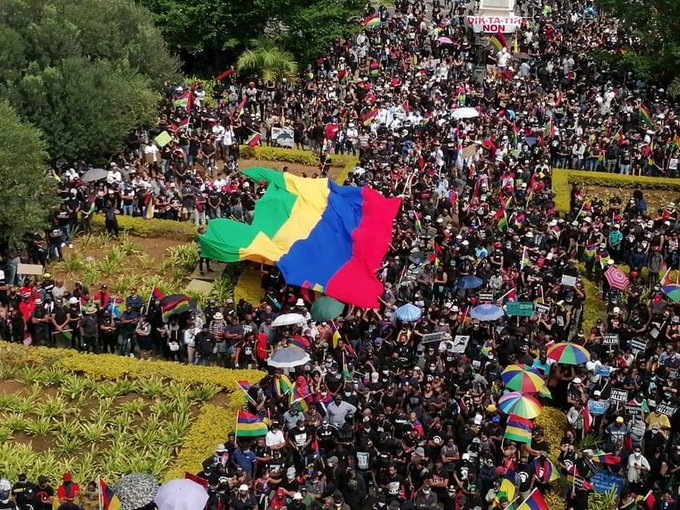 Thousands of people poured onto the streets in Mauritius capital Port Louis on Saturday to protest the recent oil spill and the eventual death of at least 40 dolphins.

The dolphins were found near the site of the recent oil spill from a Japanese ship, with protesters calling for an investigation.

Banners demanding for the resignation of the government were seen at the packed square of St Louis Cathedral, where the protesters had gathered.

Many had T-shirts with the inscription: “I love my country. I’m ashamed of my government.”

A protester was quoted by Reuters as saying that “We do not trust the government and the diluted information they’ve been feeding us regarding the management and responses to the oil spill.”

People have taken to the streets in Mauritius in protest over handling of the recent oil spill.
Many of the protestors are demanding an investigation following news of at least 39 dead dolphins washing ashore- while others call for govt to resign.
(Video: Pascal Laroulette) pic.twitter.com/XmBwaHV9oj

The government has however promised to carry out autopsies on the dead dolphins and has already set up a commission to investigate the oil spill.

Mauritius was a major tourist attraction before the outbreak of coronavirus. It is popular for its beaches which attract thousands of tourists each year.

The country can also boast of having a wide variety of fish and being a major exporter of tuna.

Some experts are already calling the spill a disaster, with major risks of pollution.