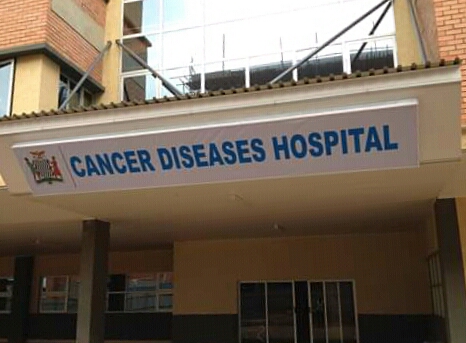 Thandiwe Banda, the youngest first lady Zambia has ever had, was only in her 30s when her husband, Rupiah Bwezani Banda became the country’s fourth president in 2008 and ruled until 2011.

Despite having had a relatively short stint in office, the couple and family might have still enjoyed the perks of being at the helm of the country’s leadership, even beyond their tenure, as can be expected, but a few years after leaving office, things turned sour, as the former First Lady was diagnosed with breast cancer in 2014.

She then travelled to neighbouring South Africa for medical care, until 2015, when she returned as a survivor, following several months of medical treatment. But little might the family have known that lightening could strike twice.

It has, as the Banda’s have again become bearers of bad news, following the former president’s announcement, about a week ago, that he had been diagnosed with colon cancer.

“I have been moved to make this announcement taking into consideration that, although, this is a personal and private matter, which was initially only known by my close relatives, including my two sisters, Mrs Velesi Katema and Mrs Seba Zulu, my younger brother Mr James Banda and my children here in Zambia and diaspora, led by my eldest son James Banda, the Zambian People, who honoured me with the privilege to serve them as Head of State, for which I will remain forever grateful and indebted, deserve to know that I have been diagnosed with cancer of the colon,” Banda announced.

Banda’s current wife’s battle with the disease six years ago, was not the first time he had witnessed a loved one fighting cancer. He lost his first wife, Hope, to the same disease.

Such experiences where more than one family member has Cancer, are not rare in Zambia, due to the prevalence of certain cancers in the country.

Studies show breast and cervical cancers, respectively, as the leading causes of cancer mortality in Zambia.

The country has one of the highest cervical cancer rates of any nation, yet almost all of these tragedies are preventable, either through the HPV vaccine or through early screening and treatment, according to studies conducted early this year and released by Project Concern International.

How common the disease has become, has since led to a number of concerned individuals and groups into coming up with some initiatives meant to fight it.

These include the Zambia Cancer Society (ZCS), who in partnership with Facebook groups, such as ‘Teal Sisters’, this month came up with a stylish way of commemorating Breast Cancer Awareness Month, which falls in October  every year.

With these groups’ guidance, Zambian ladies have been taking and posting on social media, headshots of them wearing traditional head gear, called ‘Ichiduku’, under what they have termed, ‘Duku challenge’.

They are also calling this awareness month as ‘Dukutober’, after the same gear. The Duku is a big headwrap, mainly made from African print fabric, also known as ‘Chitenge’, and is commonly worn at functions, such as traditional ceremonies, Bridal showers, etc.

For Dukutober, the initiators have been encouraging women to wear the gear in different styles and post a picture, accompanied by some encouraging words or remembrances to all who have experienced or witnessed friends, colleagues or family members’ battle with the disease and died, survived or are still fighting.

“Sadness at the loss of a loved one may never entirely go away, but remembrance lives on. We want to remember those we’ve loved and lost to Cancer, not only for them, but also as importantly for ourselves, to mend, to heal, to live, and never to forget,” say the Zambia Cancer Society.

This challenge has attracted scores of social media users and famous people across the country. Over 2,300 social media users have joined the challenge so far, giving participants a platform to spare a thought for not only the people they know, but all who have lost their lives to Cancer, who won the battle and those who are still fighting.

The challenge has unleashed many cancer testimonies in Zambia, as women share narratives of their personal journeys and/or experiences with the disease.

“It’s not until a few years ago that I lost a beloved relative to Cancer, that I realised that this disease could affect anybody – any of us,” says Dukutober Ambassador, Mutinta Musokotwane, in her social media post.

The exercise has also helped to shed light about the various aspects of Cancer and gotten a number of people reflecting on the issue, with some now making decisions to go for early testing and subsequently encourage others to do the same.

This is already helping to break the silence, to encourage women to fight back, as well as give hope and support to each other, which is what the initiators hoped they would achieve, when they came up with the initiative.