Ghana’s opposition party the National Democratic Congress (NDC) has started legal processes at the country’s supreme court challenging the results of the 2020 elections.

The processes to file the court papers are taking place on Tuesday, December 29, 2020 in the capital Accra.

There were indications the filing of the court papers will happen on Wednesday but that could be done a day earlier.

In a statement, the NDC said its National Executive Committee (NEC) has approved the party’s decision to go to court to challenge the results of the 2020 elections. 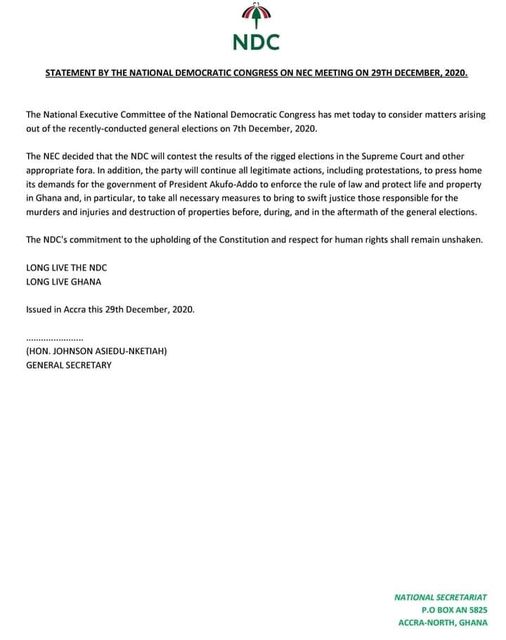 He was declared winner of the presidential election by the country’s electoral commission chairperson earlier this month.

President Akufo-Addo won by 51.59 percent with his closest rival, the former president, John Mahama securing 47.36 per cent of votes.

“At the end of the polls, Nana Addo Dankwa Akufo-Addo of the New Patriotic Party, obtained 6,730,413 votes, being 51.595% of the total valid votes cast.” Jean Mensa, Chairperson of the electoral commission told a news conference.

But the opposition party and its leader, John Mahama rejected the results refusing to concede defeat.

While in court, the NDC will continue all legitimate actions, including protests, to demand the enforcement of the rule of law and protection of life and property of the good people of Ghana.
2/2#RespectMyVote

The opposition complained of rigging by the government with support from the electoral commission, claims that have been rejected by both parties.

At least five people have been killed in post-election violence but the country is relatively calm after the election results were declared.