On February 17, during the vetting of Adwoa Safo, the nominee for the Ministry of Gender, Children and Social Protection, Mahama Ayariga the MP for Bawku Central asked whether lesbian, gay, bisexual and transgender people are human.

The question, accompanied by laughter in the background, made a mockery of queer lives and denied the humanity of a group of Ghanaians.

As shown in the video, in response, the minister-designate referred to vague colonial code against “unnatural carnal knowledge” and sided with parliament in refuting the humanity of queer Ghanaians.

In a follow up, Afenyo Markin, MP for Effutu inquired whether the minister-designate believed therefore, that LGBT+ Ghanaians deserved protection from discrimination, harrasment, and physical violence.

The implication of this question being that queer Ghanaians should not expect government protection from harm. This recent incident is illustrative of the various ways that the Ghanaian government terrorizes queer Ghanaians.

In traditional news media, the freedoms entitled to all Ghanaians is presented as a point of debate when discussing queer Ghanaians. Many of these media discourses have culminated in heightened harassment, death threats, and threats of physical violence toward queer and transgender Ghanaians.

Similarly, religious leaders have also advanced vitriol against LGBT+ Ghanaians, denying their humanity and advocating violence in the form of advocating conversion therapy, encouraging parents to reject their children, and pushing communities to expel their queer members.

Over 100 feminists solidarize with LGBT+ Ghanaians

Despite government, media, and religious  hostility toward LGBT+ Ghanaians, there has been broader queer and trans organizing in Ghana over the years.

The hardwork and perseverance of queer Ghanaians has contributed to building community, sharing resources, and working toward freedom and justice for queer and trans people.

This community organizing has created spaces of refuge in the midst of  systemic violence and disenfranchisement faced by the community. 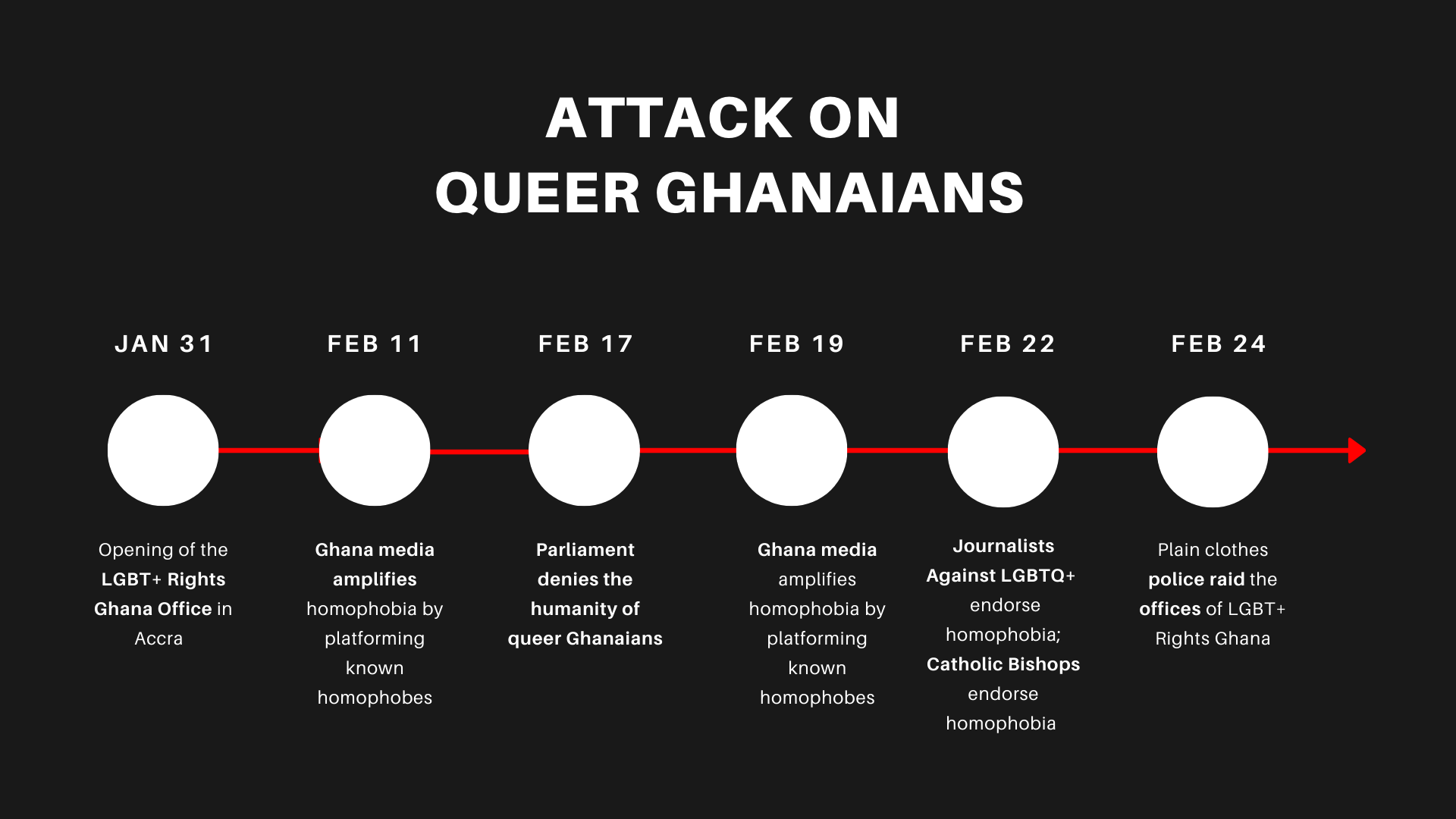 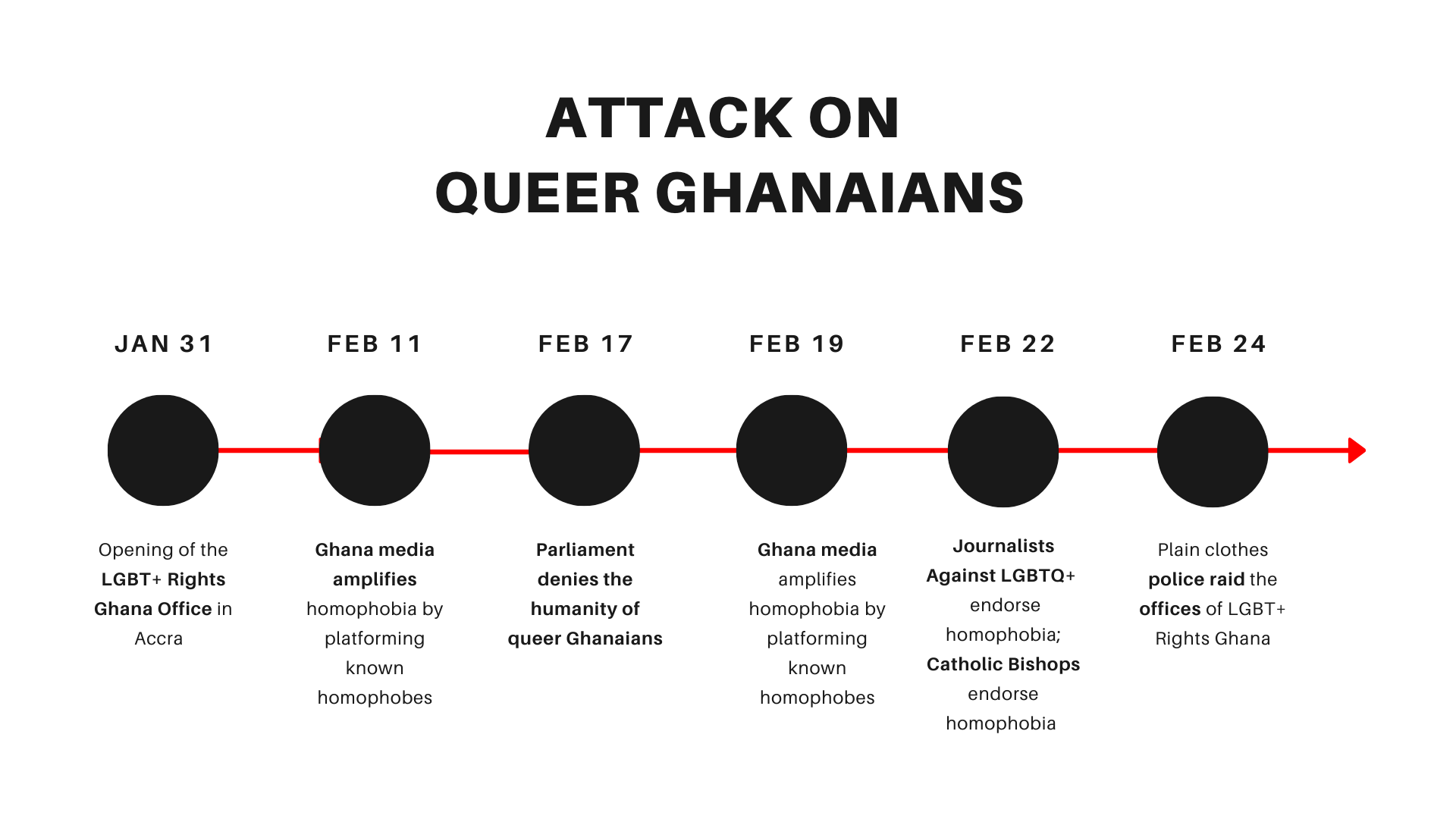 What Is Happening Now

Several community organizations in Ghana, including LGBT+ Rights Ghana and the trans* community group Alliance for Dynamics Initiative have been targeted by the police, religious, and media hate groups.

Of these recent attacks, the ransacking of the LGBT+ Rights Ghana offices is perhaps the most well-known and publicized. On the 31st of January 2021, LGBT+ Rights Ghana celebrated the opening of a community space meant to center and safeguard Ghanaian queer and trans people.

Nearly a month later on February 24, plain clothes police raided the offices of LGBT+ Rights Ghana violating their right to gather as a community, and their freedom of association.

In a recent interview with Joy FM, a radio station known to amplify violent rhetoric against queer Ghanaians, leading homophobe Moses Foh Amoaning was given the opportunity to direct further violence towards the community.

Several Ghananian religious leaders and institutions also took the opportunity to pile on, calling for continued persecution of queer and trans Ghanaians including the Clerk of the General Assembly Council (GAC) of the Presbyterian Church of Ghana (PCG), the Ghana Catholic Bishops’ Conference, the Concerned Clergy Association of Ghana, and the Office of the National Chief Imam.

This raid highlights the repressive state under which queer Ghanaians are living and has alarmed millions of Ghanaians who believe in freedom of assembly and the rights to all of us to live free from harm and persecution.

The Ghanaian media is a primary instigator of violence against queer and trans people in Ghana. By amplifying messages of hate and promoting ignorance about queer genders and sexuality, the media exacerbates a toxic and dangerous landscape for queer and trans Ghanaians.

Many news stories represent topics affecting LGBT+ Ghanaians by amplifying the perspectives of homophobic religious, social and state institutions, which contribute to a toxic landscape and constrains opportunities for self-advocacy.

Throughout the years, and in the last few days, the media has amplified the voices of those who are antagonistic to LGBT+ people, and who specifically work to violate the fundamental human rights of queer people.

While some media platforms have “outed” people who support LGBT+ rights and directed harm at them and their families, some journalists have even gone so far as to form hate groups to support violence toward queer people in Ghana.

Ghana accused of abusing rights of gays and Lesbians

On February 22, a hate group called Journalists Against the LGBTQ+ was formed to not only publicly endorse homophobia but to support the promotion of homophobic narratives in the media and in the public sphere.

We are calling on the Ghana Journalists Association and the National Media Commission to sanction this clear violation of the freedoms of vulnerable people in Ghana.

What you can do

If you are Ghanaian, sign this statement in solidarity with queer and transgender Ghanaians by a collective of Ghanaian feminists.

Tweet Nana Akufo-Addo and hold him accountable for the state-sanctioned violence directed at queer people in Ghana.

Show solidarity by openly supporting the rights of queer Ghanaians to live in Ghana safely and in dignity.

Uproar over establishment of LGBT office in Ghana