Meghan says she “didn’t want to be alive any more” 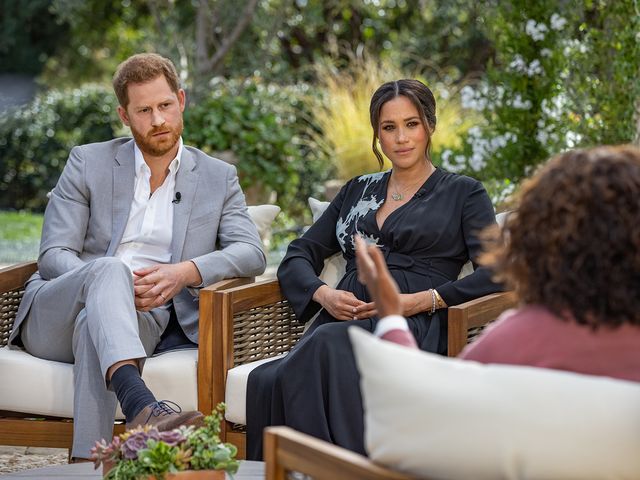 The Duchess of Sussex has said she found life within the British Royal Family so difficult that at times she “didn’t want to be alive any more”.

In a deeply personal TV interview, Meghan told Oprah Winfrey that she did not get help when she asked for it.

She said a low point was when Harry was asked by an unnamed family member “how dark” their son Archie’s skin might be.

Oprah later said Harry had told her it was not the Queen or the Duke of Edinburgh who made the comment.

The highly-anticipated interview with Oprah, which the couple were not paid for, aired overnight in the US.

During the two-hour CBS special, to be screened in the UK on ITV at 21:00 GMT on Monday night and on ITV Hub, Courtesy of Harpo Productions/CBS, the couple covered a range of topics, including racism, mental health, their relationship with the media and Royal Family dynamics.

In other key revelations:

The couple moved to California after formally stepping down from royal duties in March 2020, and it was announced last month that they would not be returning as working members of the Royal Family.

Meghan said that she started to feel lonely when limits were placed on what she could do, revealing that at one point she did not leave the house for months.

At one point she thought she “could not feel lonelier”, she told Oprah.

Asked by Oprah if she was thinking of self-harm and having suicidal thoughts at some stage, the 39-year-old replied: “Yes. This was very, very clear. Very clear and very scary. I didn’t know who to turn to in that.”

Meghan said that she felt “haunted” by a photograph from an official event she attended with Harry at the Royal Albert Hall while she was pregnant.

“Right before we had to leave for that (event), I had just had that conversation with Harry that morning,” Meghan said.

Winfrey asked: “That you don’t want to be alive any more?”

She said that she attended the event with Harry that night because she felt she could not be “left alone” and recalled Harry gripping her hand tightly while in attendance at the Royal Albert Hall.

Oprah also asked the duchess why she thought the Royal Family did not make her son Archie a prince – which Meghan said she wanted so that he would get police protection.

The Duke and Duchess of Sussex’s children do not automatically become princes or princesses because of a rule that has been in place since 1917 – unless the Queen steps in.

“In those months when I was pregnant, all around this same time so we have in tandem the conversation of he won’t be given security, he’s not going to be given a title, and also concerns and conversations about how dark his skin might be when he was born,” Meghan said.

She said the remarks about skin colour were made to Harry and he relayed them to her.

Asked by Oprah whether there were concerns that her child would be “too brown” and that would be a problem, Meghan said: “If that is the assumption you are making, that is a pretty safe one.”

When pressed, she refused to reveal who the individual was, saying: “I think that would be very damaging to them.”

Harry also refused to give further details, saying: “That conversation, I am never going to share.”

“At the time it was awkward, I was a bit shocked,” he added.

The 36-year-old prince said that none of his relatives spoke out in support of Meghan following the racism he said his wife faced from the media.

“No-one from my family ever said anything over those three years. That hurts,” Harry said.