Remittances on the rise despite Covid-19 pandemic 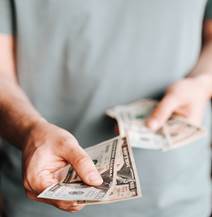 Since COVID-19 hit South Africa in early 2020, leading payment aggregator and provider of secure payment solutions, Pay@ has seen a 50% year-on-year increase in money transfer transaction volumes – a trend which Account Executive, Hennie Blignaut, expects to show no sign of slowing down.

The company’s Sales and Marketing Head, Barry Williams, explains that the initial spike was driven by the closure of the country’s borders and although these have begun to reopen under lockdown Level 1, he believes that the clients of money remitters are seeing the value of a safer, more organised and convenient process to get money to their families.

“Before, they would rely on taxi drivers to take the money and give it to relatives in another part of South Africa or in another country. Now, there’s trust in formal systems which promise to be more secure and efficient.”

He notes that not only has there been significant growth in money being sent out of the country, but money coming in as well due to remittance companies partnering with big international remitters. “Consequently, there’s going to be a lot more growth in this industry.”

Blignaut adds that remittance companies are looking to expand their footprints via retailers in African countries outside of South Africa.

“In fact, Pay@ is working with retailers and digital partners in several African regions to enable people to cash out the money sent to them by friends and family members both in other parts of those countries and around the continent.

Currently, we are prioritising the sending of money to South Africa, with Botswana soon to follow and have found that the influx of incoming money is almost greater than that of outgoing funds.“

He says that while 99,64% of transactions took place via retailers over the past year, there has been an uptake in digital channels, albeit a slow one.

“Many people in South Africa struggle to get access to traditional bank accounts, so it limits the digitisation of this industry; however, the use of mobile wallets is gaining traction in terms of receiving money.”

Looking to the future, Williams shares that remittance companies will increasingly be adding banks in Asian corridors like Bangladesh and India to their market presence.

He concludes by saying that regardless of the channels people use, the country they are in, or their preferred tender type, our aim is to enable customers to send and receive money cost effectively and efficiently.

We do so by simplifying the process, making it secure by equipping them with a single reference number that can be used at all retailers and payment networks and ensuring that 99,996% of our transactions do not generate a query.

At the same time, this helps our partners reduce operational costs on their side. By offering a single integration and a single aggregated recon process, this eliminates the need for multiple administrators to do the checks and balances to ensure the correct money flow.”

For more information, go to  https://payat.co.za.

What you need to know about the AfCFTA Guided Trade Initiative