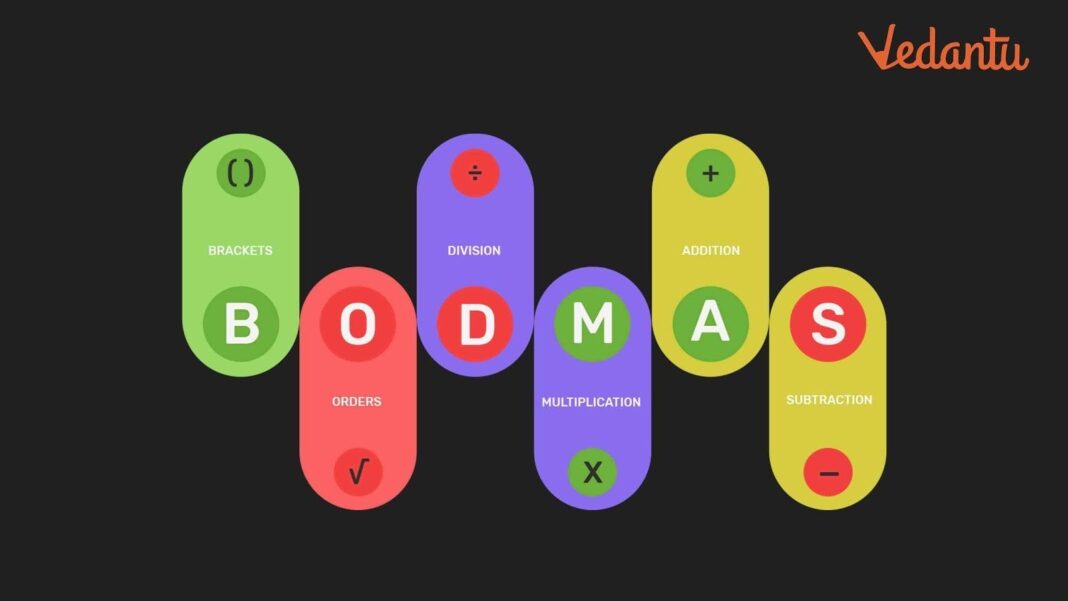 This mathematical rule specifies the correct order of operations to be used when answering a mathematical number sentence question with multiple operations.

The first step in BODMAS Rule is to do anything in brackets, followed by orders (such as square root or indices). Division and multiplication are on the same level, which means they have equal priority and should be done from left to right, rather than all-division first, then all multiplication.

Similarly, addition and subtraction are on the same level and should be performed from left to right.

In this article, we are going to discuss the importance of the BODMAS rule as well as the meaning of the BIDMAS rule.

What is the BODMAS Rule?

We use the acronym BODMAS to help children remember the order of mathematical operations – the correct order in which to solve math problems.

B stands for Brackets, O stands for Orders (powers/indices or roots), D stands for Division, M stands for Multiplication, A stands for Addition, S stands for Subtraction are the abbreviations for Bodmas.

According to the Bodmas rule, mathematical expressions with multiple operators must be solved from left to right in this order. Division and multiplication are interchangeable and are determined by which comes first in the expression, as are addition and subtraction.

The Bodmas rule as a mnemonic (similar to how Richard Of York Gave Battle In Vain is used to remember the colours red, orange, yellow, green, blue, indigo and violet).

What is the BIDMAS Rule?

To help remember the order of operations, the BIDMAS rule is an alternative acronym to BODMAS. The only difference is that an I is used instead of an O. The underlying meaning is the same. Today, the term “BIDMAS” is more commonly used in primary schools all over the world.

BIDMAS is an acronym that stands for Brackets, Indices, Division/Multiplication, and Addition/Subtraction.

What you do with the numbers is referred to as “mathematical operations.” The four main operations are as follows:

What Does the Term Order of Operations Mean?

This is the order in which certain operations must be completed, beginning with brackets and ending with addition and subtraction.

Division and multiplication must be represented alongside each other because they are equally important (and must be completed from left to right, whichever appears first) – the same is true for addition and subtraction.

Why is the BODMAS Rule Important?

If you had to quickly determine which math operation to perform first in the following expression, 3 + 6 – 4 x 5, you might be perplexed as to whether to proceed with addition, subtraction, or multiplication. To alleviate this confusion, the BODMAS rule was developed to assist students in remembering the correct order in which calculations should be performed.

It is regarded as one of the most important mathematical principles, underpinning many of our mathematical conventions. All students should learn the BODMAS rule before beginning algebra in school. It will make mastering more difficult math concepts much easier.

It’s important for students to learn Math because it teaches them what numbers are and how they relate to real-life situations. It enables them to become self-directed learners and equips them with the knowledge to pursue opportunities in a variety of fields.

When dealing with topics such as BODMAS, students may feel uneasy about grasping the concept because the easier it appears, the trickier it is to arrive at the correct answer if not thoroughly understood. As a result, students might be dissatisfied.

Do you find the BODMAS Rule very difficult to understand? If yes, you can visit Cuemath website to learn maths and understand the concept in a fun and easy way.