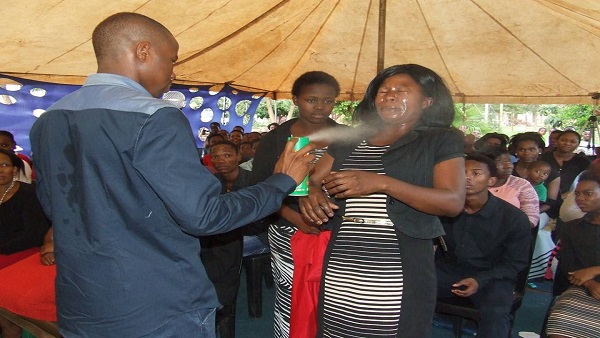 A South African Prophet, Lethebo Rabalago has come under criticism and ridicule for spraying his congregants with an insecticide.

The prophet who runs a charismatic church in Limpopo province claimed, according to South African media that the insecticide spray has healing powers.

His church’s Facebook page said the prophet speaks to demons in order to address problems of his congregants.

Prophet Rabalago reportedly drives these demons away by spraying the congregants with the insect repellent called Doom and produced by Tiger Brands.

The said spray also heals cancer and HIV according to the church. Many South Africans have been ridiculing the prophet and his actions. Tiger Brands is asking the prophet to stop using its product.

We are aware of the recent actions which have been circulating on social media by a person referring to (cont) https://t.co/V4zK64JEjk

The South African government is making efforts to clamp down on such activities of many so-called men of God.

There have been reports of similar actions by pastors in South Africa where a pastor asked congregants to eat snakes and grass and drink fuel for healing.