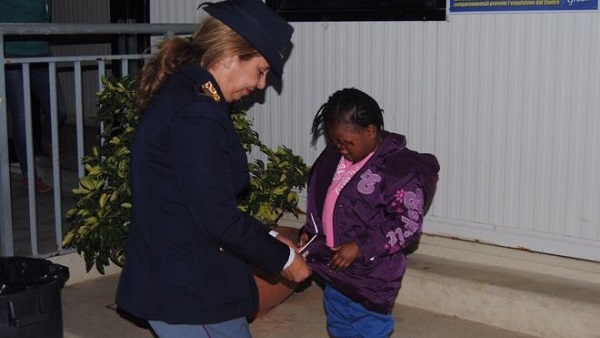 A lost four-year-old migrant girl, who travelled alone from northern Africa to Italy, will be reunited with her mother after an extraordinary coincidence.

Oumoh’s mother took her from her father’s family in Ivory Coast to save her from female genital mutilation.

But the pair were separated when Oumoh’s mother left her with a friend in Tunis to fetch things from home.

When the friend had an opportunity to travel to Italy, she took Oumoh with her but then left the girl alone.

Oumoh was rescued at sea and brought to the Italian island of Lampedusa, where none of the boat’s other passengers knew who she was.

Police inspector Maria Volpe – known as “Mamma Maria” for her job looking after unaccompanied migrant children – went to the island to collect Oumoh.

She was traumatised and could not communicate with the staff, Marilena Cefala, the head of the centre told the Thomson Reuters Foundation. She was taken from the centre to a children’s community in Palermo.

Then, days later, back at the reception centre on Lampedusa, a happy coincidence intervened.

Among a group rescued off the coast of Libya one day was Nassande, an eight-year-old girl, and her mother and brother.

Ms Cefala gave Nassade her mobile phone to play with while she interviewed her mother. Swiping through pictures on the phone, Nassade saw someone she recognised.

The two girls had crossed paths in Tunis, Nassade said. A Facebook search took Ms Cefala to one of Oumoh’s relatives in France, who passed on a phone number for her mother.

“She cried tears of joy when I told her that her daughter was safe and alive,” Ms Volpe told Thomson Reuters.

Oumoh’s mother said she had fled her family to spare her daughter from the worst form of female genital mutilation – in which external genitalia are sliced off and the vagina is sewn up.

She said she left her daughter with a friend in order to retrieve belongings from her home in Ivory Coast, but the friend decided she had to take the opportunity to travel to Italy and took the girl with her.

A DNA test would be carried out as soon as possible to confirm that the two were mother and daughter, so they could be reunited, Ms Volpe said.

“It touches your heart when you see the eyes of the children, who are so small,” she said. “They cling to you quickly, you become their reference point. But it is an honour to be able to do this work with love and humanity.”