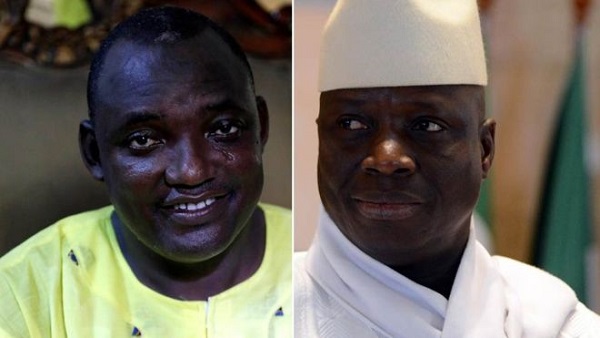 Whatever was going to happen in the leafy suburbs of Abuja on the eve of the 50th Ordinary Session of the ECOWAS Summit, historians and political scientists alike will undoubtedly look back at a country that has set an important precedent in West Africa’s integration.

In between the whispers of an Ecowas Standby Force to be deployed in the event the Gambian leader was going to remain obdurate in his stance to remain in power, coupled with murmurs of the mystery surrounding Jammeh as a mad dictator who, like a mad dog, needs to be put down, one thing is clear: the posse of West african diplomats were never going to take The Gambian situation lying down.

In one foul sweep, Gambia was kicked off the dictator list — only to stage an unwelcome comeback. The Johnny-come-lately in Adama Barrow may have spoken too much about what he wanted to do to Jammeh on his assumption of power. There were a number of people who believe Barrow spoke too soon.

It is arguable a seasoned politician would have watched and waited. And waited some more–even after his swearing in. Now, Barrow’s loose talk has sunk the proverbial ship and we are in the unfortunate state of *status quo ante*.

But the game is far from over.

That whiff of freedom that passed through West Africa a few weeks ago when Jammeh called Barrow to congratulate him was clearly not fleeting: Africans from all over the continent felt it, even as they found immense difficulty scraping their mouth from the floor at the shockingly-exciting news for The Gambia.

For ECOWAS, this is textbook conflict resolution: remind Jammeh of Ecowas protocols on democracy; the sub-regions’ commitment to democracy and zero tolerance for coups. For the African Union, and activists, they will be thinking through the African Charter on Democracy, Elections and Governance. A consonance between regional protocols and continental ones are not always as explicit — even as it is understood they should be.

For the UN Office for West Africa & the Sahel’s boss, this may be unprecedented, but so far, so familiar. After all, in the many years Dr.Ibn Chambas headed ECOWAS, dealing with, and managing, Jammeh was de rigeur. But now, there’s a new motivation: to ensure that the effort of the newly-expanded and erstwhile UNOWA, which now has a mandate to cover the beleaguered Sahel, under the banner of UNOWAS, is all worth the trouble.

At the Summit-proper, the West African leaders predictably stood their ground, stating the need to “uphold the result of 1st December 2016 election in the Republic of The Gambia”, and “guarantee the Safety and protection of the President-elect Mr. Adama Barrow.”

The Authority agreed that, “all Head of States will attend the inauguration of the President-elect Adama Barrow who must be sworn in on 19th January 2017 in conformity with the Gambian constitution.”

Calling on the “Government and the Coalition Parties to show restraint in order to preserve national unity”, ECOWAS urged respect for “the will of the Gambian people as expressed by the Presidential election results of 1st December 2016”.

ECOWAS further “requests the endorsement of the AU and the UN on all decisions taken on the matter of The Gambia and also requests their support for the mediation efforts of ECOWAS including the provision of technical assistance where required”.

Finally, The Authority “shall take all necessary actions to enforce the results of 1st December 2016 elections”. Enforcement has now become synonymous with military, intervention by an Ecowas Standby Force.

In the meantime, the leafy suburbia of Abuja must, offlate, seem like a cruel place, especially for leaders consumed by hubris.

The Executive arm of ECOWAS appears to have become the ultimate nemesis, a kind of arch-defender of sub-regional democracy, boldly supporting and defending the region’s democratic dispensations.

Together with ECOWAS, UNOWAS and the AU appears to have become a formidable troika that is more ready than ever to do more than firefight a sub-region. The imperative of peace reigns supreme in the resolution of The Gambia.

The institutional responses have been sound, and the leadership shown by Senegal to raise the issue in New York at the UN Security Council could be construed as an indication of a West Africa that wants to change the narrative of an unstable region into something more positive the historians and political scientists can go home smiling about.

The precedent of The Gambian Crisis

When we look closely at the micro-narrative of the Gambian crisis, there have been many firsts.

First, this is probably the first time that Jammeh has been shown the red card. Even during Chambas’ time as Ecowas head, which is considered a landmark time in the regional institution’s history, Jammeh’s regime was barely ever up for discussion. Now that Chambas is a high-level official, it seems a lot more less difficult to deal with him.

Second, this is also probably the first- ever ECOWAS conflict that has played out on social media. By the time the news was announced of West african leaders deciding to attend a summit in Abuja to discuss a number of regional issues, including Guinea-Bissau and Gambia, the agenda of the meeting was posted on ECOWAS’ facebook page. In March 2012, when the Mali crisis broke out, ECOWAS had yet to develop a Facebook page, which is now only a year old.

Third, this is arguably the first crisis for the new President of the ECOWAS Commission, Marcel de Souza. The Beninois former IMF official has defined his tenure so far with cost-cutting measures, and red-tape reduction than battling with typical Ecowas conflicts. This was demonstrated by his call to drawdown the ECOWAS mission in Guinea-Bissau(ECOMIB) so as to reduce the burden of supporting the beleaguered country.

Contrasted with his predecessor, Burkinabe Kadre Desire Oedraogo, the erstwhile Commission President was confronted with the Mali coup shortly after he entered office in January 2012. In May 2012, Guinea-Bissau erupted as a second crisis Ouedraogo had to show leadership on.

Fourth, Gambia is the first crisis that has seen a wholly anglophone troika (Nigeria-Ghana-Sierra Leone) be delegated to act. When Cote d’Ivoire’s civil war degenerated 6 years this month to the point ECOWAS was considering using military force against Gbagbo who was obdurate in stepping down for Outtara, the troika at the time was a Benin-Cape Verde-Sierra Leone one. In Mali(2012), the duo, initially, was a francophone one in Burkina Faso and Cote d’Ivoire; they would later be replaced by then-Burkina Faso president Blaise Compaore.

Fifth, this is the first crisis to happen under the first-ever female Chairperson of ECOWAS in Liberian President Johnson-Sirleaf. The celerity with which it has been handled has been no different than if men had typically handled it.

Finally, the virtually-conspicuous absence of francophone ECOWAS members — save Senegal that is coincidentally not just an immediate neighbour, but one that currently holds a non-permanent member at the UN Security Council — means that the resolution of this crisis has been, and is most likely to be, remembered as one resolved largely by the anglophone bloc in ECOWAS.

More important is the reminder of how integral each of the two linguistic blocs will continue to remain to each other as they head towards fifty years of the organization’s history.

But even more important is the precedent set by this 50th Ordinary Session, which seems to signify a death-knell to continental dictators–prospective and otherwise–that a significant wake-up call is here: West Africa is no longer country for old dictators.

*Emmanuel, a Consultant for West African Health Organization, is Deputy Coordinator of ECOWAS Journalists Network-Ghana; and Managing-Director of Ecowas Business News. He hosts & executive-produces “Africa in Focus” Show on Radio XYZ93.1fm in Ghana

Some 7,600 Nigerian refugees have reportedly fled to Niger since January this year. The United Nations which made the revelation said the violence in north-western Nigeria has...
Read more
North Africa

Morocco has suspended all ties with the German embassy in the country over its stance on Western Sahara. The suspension of relations was announced by...
Read more
News

The 279 schoolgirls kidnapped from a boarding school in the north-western Nigerian state of Zamfara have been released. They were taken to the governor’s office...
Read more
- Advertisement -

Morocco to legalise cannabis production for medical use

Morocco's government has announced that it will soon be legalizing the production of cannabis for medicinal and industrial purposes. Once the approval is secured farmers...
Read more