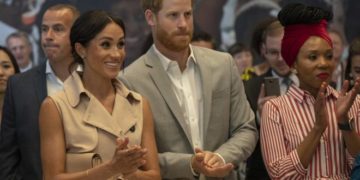 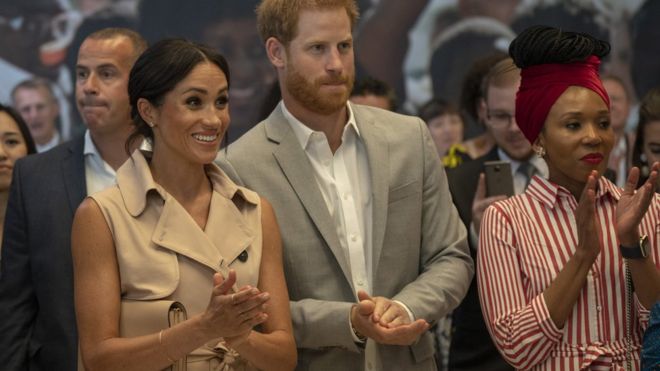 The Duke and Duchess of Sussex were said to be 'absolutely thrilled' to have been invited to attend the exhibition's launch. Photo: Getty Images

The Duke and Duchess of Sussex have met Nelson Mandela’s grand-daughter at the opening of an exhibition charting his life and career.

Zamaswazi Dlamini-Mandela said it was “an honour” for Harry and Meghan to visit the event at London’s Southbank Centre.

She hailed the pair’s “support for justice and fairness”, calling them a “shining example” for young people.

They were invited because of the prince’s charity work in South Africa.

How the Obamas helped Harry and Meghan prepare for new life

It is the first time it has been shown in the UK after successful runs around the world.

Leading former anti-apartheid campaigner Lord Hain, who is chairman of the Nelson Mandela Centenary Exhibition, said: “London was the centre of the anti-apartheid struggle.

“It was here that Mandela’s close comrade Oliver Tambo lived, led and directed the worldwide struggle, from military operations in southern Africa to diplomatic lobbying of the United Nations.

“We thought to commemorate Mandela’s centenary there should be an exhibition in London.”

According to Lord Hain, the work was curated by the Apartheid Museum in Johannesburg, South Africa, and the Duke and Duchess were invited because of Prince Harry’s charity work in southern Africa.

In 2015, during a Royal visit to South Africa, The Duke of Sussex saw the archives at the Nelson Mandela Foundation Centre of Memory in Johannesburg.
? @PAImages pic.twitter.com/YgPwAvz6BT

In 2008, Prince Harry visited the cell on Robben Island where Mr Mandela was imprisoned for 18 years and also met Mandela’s widow Graça Machel in 2015.

Also in attendance at the event’s launch were Baroness Lawrence and Andrew Mlangeni – a former inmate of Mr Mandela.

The 93-year-old joked he would not wash his hand for a month after meeting Meghan and Harry, who said they were “absolutely thrilled” to be invited to the event marking the former South African president’s life.

The exhibition runs until 19 August.