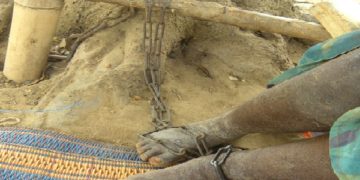 Ghana’s government has promised to ban the practice a year ago, but that has not happened. 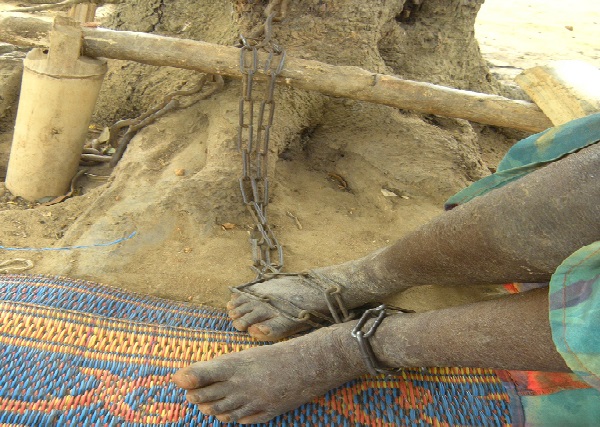 Ghana’s government has promised to ban the practice a year ago, but the rights group said that has not happened.

The organisation said people with psycho-social disabilities are still chained and detained in overcrowded and congested conditions at prayer camps.

It made these claims in a report released to mark World Mental Health Day. The rights group said a recent visit to a prayer camp called Mount Horeb in a town called Mamfi showed that abuses are still taking place.

Officials of Ghana’s Mental Health Authority were part of the visit the rights group talked about.

Over 140 people with real and perceived mental health challenges were seen at the Mamfi community. They were detained in unsanitary and dark rooms with little ventilation.

The report said “The stench of urine was overwhelming. One room housed 60 men, some of whom have been there for more than five years. As of October 10, 42 men remain confined in that room.

The gate locked. 113 people with real or perceived mental health conditions are now in the camp.”

“It’s not only important for the chains to come off, the government needs to sensitize communities and invest in local mental health services. If not, people with psycho-social disabilities may again be subjected to the cruel and abhorrent practice of shackling and the government’s ban will be an empty threat.” Barriga added.

Human Rights Watch is asking the government of Ghana to take immediate steps to “end shackling”. It wants the government to establish “a monitoring system to ensure enforcement of the ban”.

In June 2017, in an effort to enforce the law, the Mental Health Authority freed 16 people, including two girls, at Nyankumasi Prayer Camp in central Ghana.

Those freed, some of whom have mental health conditions, were taken to nearby Ankaful Psychiatric Hospital. Since then the camp has remained chain-free.

Serious gaps remain in ending the practice of shackling across Ghana. This is because the monitoring system established by the 2012 Mental Health Act has yet to be set up.

Government officials and partners from nongovernmental groups told Human Rights Watch that the mental health act isn’t getting the needed push due to lack of political will at the highest levels.

Without a monitoring system, the camps operate with virtually no government oversight.