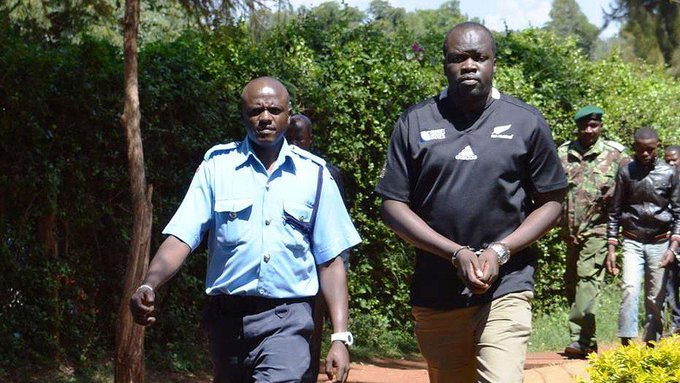 A popular Kenyan blogger Robert Alai has been arrested and charged with sharing pictures of policemen killed in an al-Shabab attack.

The blogger had posted pictures of eight police officers who died after their vehicle ran over an Improvised Explosive Device (IED) in Wajir.

Alai is being questioned by the police’s Criminal Investigations department in Nairobi.

The police considered his action as an attempt to glorify acts of terrorism.

In a statement the police said “Whereas Alai has the freedom of expression, such publications can be interpreted as propaganda for war which is not protected under the constitution.”

The statement further read that “The unfeeling act of posting pictures of our fallen heroes online by one blogger is very unfortunate and inhuman… It is also a cold-hearted display of insensitivity to the families of the deceased.”

As we mourn our fallen heroes, posting of their pictures online by one blogger is very unfortunate, inhuman, glorifies terror & is tantamount to supporting terrorism.

This is indeed the lowest we can go. We condemn this act in the strongest terms possible. pic.twitter.com/OOtvb2vQJw

Robert Alai was still arrested despite pulling the pictures down after the police made a request to that effect.

Alai had earlier defended his action saying he was fighting for police officers who endure danger and work under poor conditions.

I will continue to speak out for the poor police officers who are neglected and their allowances taken by “wakubwa.”

We must give our men and women who die wearing uniform, respect, dignity and honor they deserve.

We shouldn’t treat our cops like dogs. I am angry!! pic.twitter.com/ZoTIg8erbD

On Social media the blogger is getting a lot of support with users calling for his release.

Put your house in order. Your officers were not happy with how the bodies were carried .

The arrest of Robert Alai is just a scapegoat. #FreeAlai

Why is @NPS_Kenya deploying officers in such volatile areas in soft skins yet someone supplied junk armoured vehicles. Let @DCI_Kenya arrest the suppliers now and #FreeAlai. They are the real supporters of terrorism.

Arresting Alai based on sharing of photos, an issue that isn’t even backed by law is a wastage of time. Let the man go. #FreeAlai

So Kenya Police have arrested Robert Alai for exposing how Kenya government handles the bodies of fallen officers. Who advises our government? The constitution protects Alai and the courts, @ODPP_KE will set him free. Shame on you @NPSOfficial_KE @NziokaWaita. #FreeAlai https://t.co/kilr8piXRh

As they arrest Alai, what happened to these. This is why the answers are not sijui which section says what or what is unethical. The truth is that officers are badly treated. #FreeAlai pic.twitter.com/r5Tb1HywLq