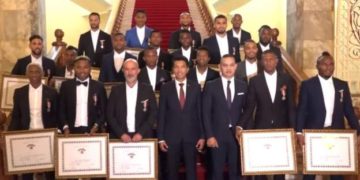 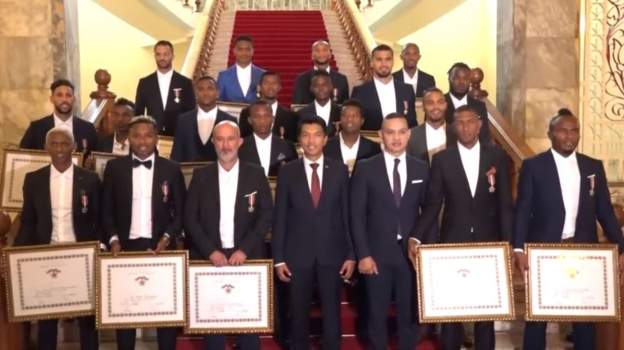 The entire national football team of Madagascar that participated in the Africa Cup of Nations tournament in Egypt have being “knighted” by the country’s President.

The team performed beyond all expectations reaching the quarter final stage of the competition.

Upon arrival home from Egypt, the team received a big official welcome and were then given the rank of Knight of the Malagasy National Order.

The country’s President, Andry Rajoelina on Monday also rewarded the team with $250,000 cash for their performance.

According to News Mada, the rewarding of the football stars took place at the Lavoloha State Palace in the capital, Antananarivo.

Hundreds of people lined the streets of the capital city to cheer on the national team members.

Madagascar were making their Afcon debut at this year’s tournament.

Most of their matches were watched by the president. Rajoelina said after the team’s exit that they “will come back stronger.”

They knocked-out the Democratic Republic of DR Congo in the second round to reach the quarter finals.

The team however lost to Tunisia in the quarter finals after losing 3-0.

During the group stages, the team shocked many by beating Nigeria 2-0.

Vickie Remoe: The woman fighting for a better Sierra Leone