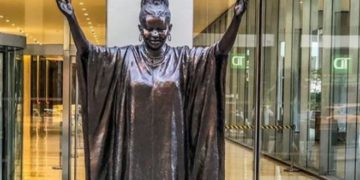 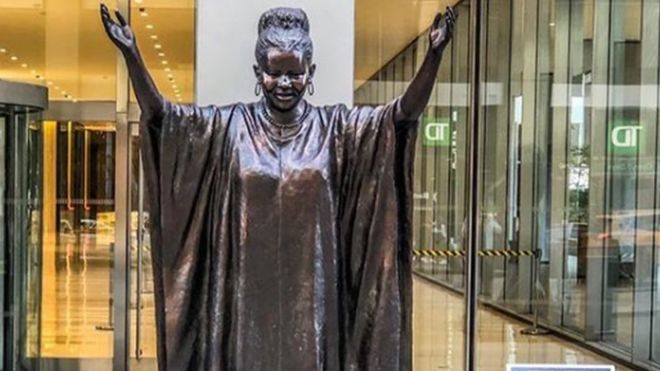 The statue of Tererai Trent unveiled in New York. Photo: STATUES FOR EQUALITY

A statue in honour of a Zimbabwean-born academic, Tererai Trent has been unveiled in New York in the United States of America.

Her statue is among several others unveiled to honour prominent women outside New York’s Rockefeller Centre.

These women and others including Trent were selected as part of the Statues For Equality project by sculptors Gillie and Marc Schattner.

Gillie and Marc Schattner say the installation of statues of inspirational women is to balance gender representation in public art.

Gillie said “We hope that as the project expands, it will include a broader diversity of race, class, ability, sexual orientation and gender expression.”

The New York project is the start of Statues For Equality and the initiative is now worldwide, with projects in many different countries, including Australia the UK and the US.

Just happened to be walking past when Dr. Tererai Trent was unveiling her statue on Sixth Ave. right next to Oprah, who told her amazing story #statuesforequality pic.twitter.com/MpfZSOoRRv

Teaching herself how to read

Trent taught herself to read from her brother’s schoolbooks. She has been a global voice for education for young women.

She earned her PhD in the US, where she now teaches health subjects at Drexel University.

She told the BBC Focus on Africa that “I’m just so humbled – it is unbelievable. Can you believe I am standing so tall in New York City?”

“We know that 3% of statues in the city are female,” Ms Trent said adding “My great-grand-mother, my grandmother, my mother – ha! – they would never have dreamt of something like this.”

Trent revealed further that “There were so many things that shaped the denial of education for young women like me – poverty being one of them, and the colonial system that never valued education.

“In the whole village, only men could read and count, and the majority of women could not. And yet some of these were brilliant women.”

Trend added that looking back at her achievement “We have a moral obligation, those of us able to achieve our dreams, to help others stand on our shoulders and provide that opportunity.”