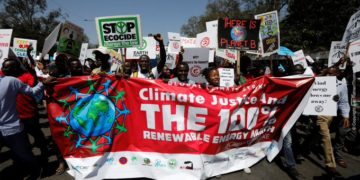 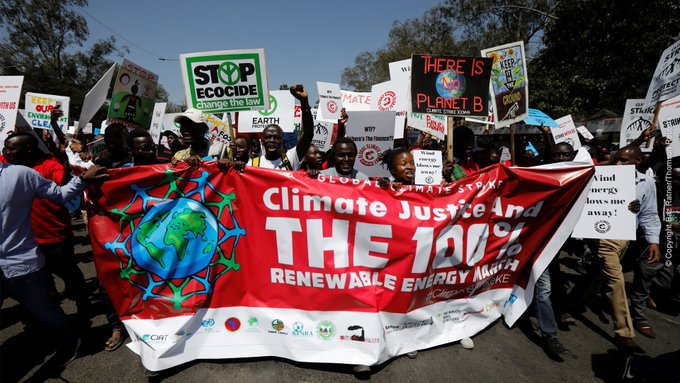 A protest march in Kenya by young people on climate change.

African countries are reportedly at risk of losing about 1.5 percent of their Gross Domestic Product (GDP) to the negative impact of climate change.

That means they are vulnerable to the devastation of changing climate.

School children from many African countries therefore had the motivation to push for the protection of the environment.

In countries like Ghana, Senegal, South Africa and Kenya among others, school children poured unto the streets to join the global strike on climate change.

They joined thousands of other children all around the world to push for global action on climate change.

The strike was sparked by the 16-year-old Swedish campaigner Greta Thunberg. She attended the New York protest after crossing the Atlantic by boat.

Greta Thunberg is not the only teenage activist working to protect the planet. There are several others including young Africans.

They made their voices heard and their protests were recognized all over social media as well.

Todays #ClimateStrike in Accra was a collaboration between us in #YRE and @MayorAdjeiSowah at the @AccraMetropolis #FridaysForFuture https://t.co/LbLqfKcnCT

GLOBAL CLIMATE STRIKE: Hundreds of thousands of people from Kenya to Ireland participate in a climate strike to call for action on climate change ahead of next week’s UN Climate Summit. https://t.co/5h4qDVGMJZ pic.twitter.com/XYb3FxcxGp

KENYA: Some #ClimateStrike protesters in Nairobi wore hats and outfits made from plastic bottles to emphasize the dangers of plastic waste #CoveringClimateNow

Nigeria: Suspected serial killer kills whenever he "had the urge"