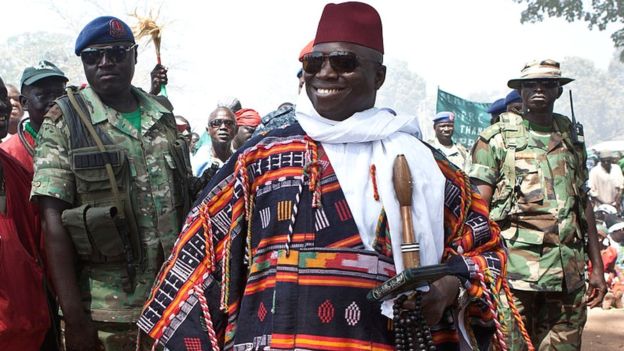 The party of former President of Gambia, Yahya Jammeh is demanding the return of seized assets it said did not belong to the former leader.

Fabakary Tombong Jatta, the interim leader of the APRC party told journalists on Wednesday that the government of the Gambian must return the assets seized from the party immediately.

Mr Jatta also demanded that the government releases bank accounts belonging to the party since they didn’t belong to Yaya Jammeh.

Many assets belonging to Yahya Jammeh have been seized by the state pending auctioning since they were reportedly stolen from the state.

This month the Gambian government revealed that Jammeh stole $362 million from the state during his 22-year rule.

The revelations were made public by the government in a report following a commission of inquiry into the presidency of Jammeh.

The report said millions of dollars were stolen by Jammeh and his associates during his tenure before he exited power in 2017.

The extent of theft under Yahya Jammeh was already known months after he left office. But a commission was set up to probe further and recommend what must be done by the government.

But Jammeh’s party said some of those assets seized did not belong to Jammeh.

Jatta the leader of Jammeh’s party said “We want the government to return our assets back and unfrozen our accounts because this belong to us as a party.

We have been patient for quite a long time now and we want our properties back, Jammeh knows nothing about the accounts and the vehicles we purchase is from the party coffers not from former president Jammeh”.

According to the commission of inquiry’s findings Jammeh, acquired 281 landed properties across the country.

Some of these properties include private residential and commercial properties, islands, forest parks, wild life reserves and wetlands.

Jammeh’s party rejected the findings of the commission, accusing the government of poorly handling the entire inquiry and its outcome.

Mr. Jatta claimed the commission’s probe into the finances of Yaya Jammeh’s was unconstitutional.

He accused the President Barrow led government is abdicating its responsibilities to serve the interest of the country.

Jatta said the government was operating based on selective justice and nepotism.

Jammeh’s party leaders also berated the work of the truth reconciliation and reparation council (TRRC) calling it unconstitutional and accusing it of misleading Gambians.

Jatta said “we know what is happing, because witness who appears at the TRRC are programed to come and lie against Yaya Jammeh.

They will not allow some witness to appear because some of them will tell the truth but instead they chose who they want to talk to so they want to mislead Gambians.”

The party also claimed the government isn’t respecting the memorandum of understanding reached between former president Jammeh, UN, AU and ECOWAS leaders before went into exile.

Jatta said his party members have “are ready to sacrifice our lives so that the truth prevails because we are the biggest party in the country but we will not be allowed to be intimidated, we are law abiding and will continue to do so until otherwise”.

Jammeh ruled the West African country for 22 years and was forced out of office in 2017 after he lost the 2016 presidential elections to current leader, Adama Barrow.

Zimbabwe's Mugabe will now be buried in hometown