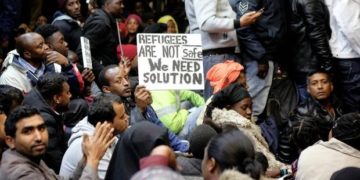 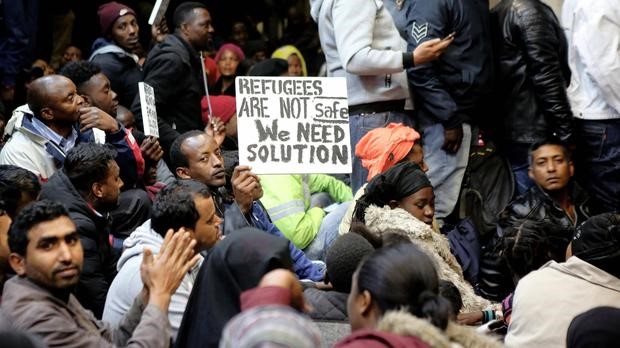 Some refugees residing in South Africa have staged a protest outside the United Nations High Commission for Refugees Regional Office for Southern Africa in Brooklyn, Pretoria.

Other refugees also camped outside the UN refugee agency in Cape Town.

They are protesting demanding protection from xenophobic attacks as they claim of fears of being attacked by locals.

IOL reported that the refugees from Burundi, Congo, Malawi, Ethiopia and Somalia claimed since the attacks on foreign nationals many of them have been physically abused.

Hundreds of people, originally from Rwanda, DR Congo, Burundi and Bangladesh, sleep outside the UNHCR @Refugees office in Cape Town.

They are asking #UNHCR for help as they say they are not safe in South Africa, due to high levels of crime as well as xenophobia

Some of these refugees are without refugee permit statuses and other documents that protects them from the South African Police Service.

It therefore exposes them to attacks putting the safety of children of refugees, their education and unemployment opportunities at risk.

Spokesperson for the protesters, Anitha Nkozimana questioned why asylum seeking documents or refugee permits are difficult to secure in South Africa.

Nkozimana said “As the violence against foreign nationals continue our only hope is the United Nations High Commission for Refugees.

We are being attacked and everyone is silent on how we as refugees could be assisted. The police are also not of any help.

We are questioning why in other countries the commission is active when it comes to refugee problems but here they are silent.”

Xenophobic attacks have been rampant in recent years in South Africa.

In the past couple of months, many foreigners, mostly Africans, were targeted in the latest wave of xenophobia attacks.

It forced countries like Nigeria to evacuate their nationals from South Africa.

Ghanaian university to turn away students who 'dress indecently'