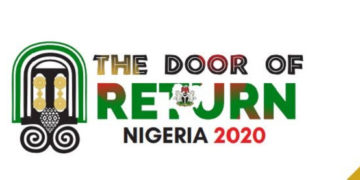 Ghana, Nigeria and Benin have been close neighbours and shared a lot of economic social and political history.

Nigerian and Ghana especially have had a lot of rivalries in the areas of football and music as well as in recent times the battle for the best Jollof (a spicy delicacy prepared with rice).

But another raging troll between the West African neighbours is over a reported initiative to attract African Americans in the Diaspora to come back to the continent and have a real feel of it.

At the end of 2019, Ghana announced a successful end to its Year of Return initiative launched by the country to mark 400 years since the first set of Africans were sent across the Atlantic to America to serve as slaves.

Ghana’s Year of Return, an initiative of the government of Ghana sort to encourage Africans in the diaspora to come to Africa to settle and invest in the continent.

Ghana’s Government estimated that the gains for the Tourism sector at the end of the initiative was about $1.9 million, although some critics doubts the revenue raked in.

Several A List celebrities made their way to Ghana especially for the festive season.

The development seemed to have sparked some reported interest among some of Ghana’s neighbours namely, Nigeria and Benin.

There were reports that Nigeria had launched its version of the initiative and christened it ‘Door of Return’ while Benin also announced the ‘Gate of Return’.

Nigeria ain’t trying to be left behind next December. I’m here for it all. pic.twitter.com/gGKTxzr3Uu

The news got Social Media buzzing as many Ghanaians begun to troll Nigerians; accusing them of imitating their initiative.

This is totally funny… It should be door of no return rather. With the things going on there Nija is a scary place to be at. Even copying Ghana y’all can’t do it right😂😂

Everything Ghana does Nigeria want do, we did year of return, now they also want to do DOOR OF RETURN!

The Nigerian Diaspora Commission and the Federal Government of Nigeria have disassociated themselves from the reports making the rounds on social media particularly on Twitter, to suggest that the country is launching a 2020 agenda to get Africans in the diaspora to come back to their roots.

The government said no such program has been launched for the year 2020.

BEWARE OF UNAUTHORIZED OF DOOR OF RETURN-* *NIGERIA 2020* *PROGRAMME.

The attention of Nigerians in Diaspora Commission (NIDCOM) has been drawn to a purported ”Door of Return 2020 program in Nigeria” by some agents.#Thread pic.twitter.com/2ZSmI1vzsu

It however said there was a ‘Door of Return’ program organized by the African Door of Return Experience and Renaissance Foundation which has been running since 2017.

Despite all these clarifications, Ghanaians boast of starting a positive enterprise which its neighbours are learning.

Cardi B wants a Nigerian name, seeks help from fans