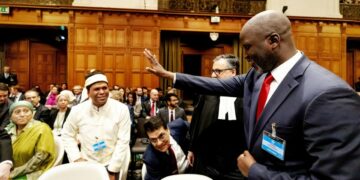 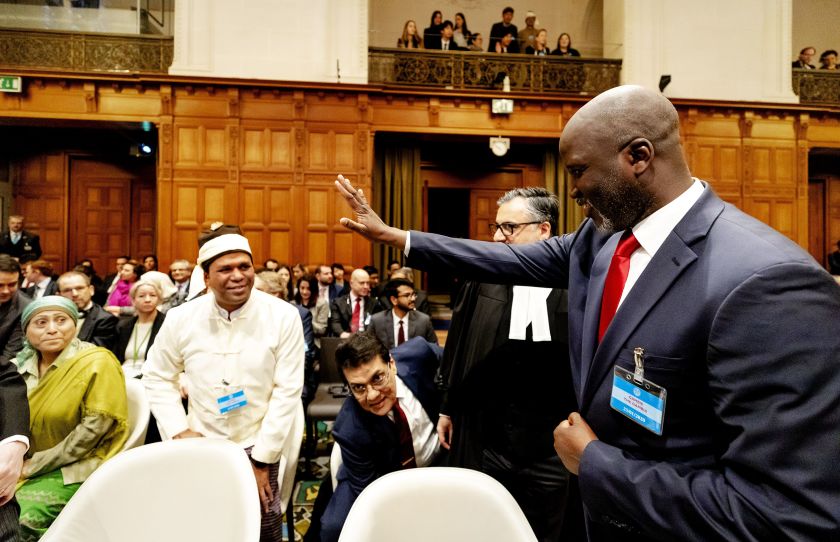 Aboubacarr Tambadou, Gambia’s justice minister, waves to a representative of the Rohingya community Jan. 22 at the United Nations’ International Court of Justice in The Hague.(ANP/AFP via Getty Images)

Gambian officials are rejoicing over a ruling by the International Court of Justice for Myanmar to protect its Rohingya population from atrocities.

The order given on Thursday according to Gambia is a “triumph of international justice”.

In its suit, Gambia accused Myanmar of genocide against Rohingya in violation of a 1948 convention.

More than 730,000 Rohingya who are minority groups fled Myanmar after a military-led crackdown in 2017.

Many of then were forced into camps across the border in Bangladesh and U.N. investigators said that the military campaign had been executed with “genocidal intent”.

Although the court’s final decision on this case is expected to take years, Thursday’s ruling only addressed Gambia’s request for preliminary measures.

The court in a unanimous ruling by 17 judges confirmed that Rohingya population continue to face threat and Myanmar needs to act to protect them.

Presiding Judge Abdulqawi Yusuf said in its ruling that Myanmar must “take all measures within its power to prevent all acts” prohibited under the 1948 Genocide Convention, and report back within four months.

He also said that Myanmar must use its influence over its military and other armed groups to prevent violence against the Rohingya “intended to bring about its physical destruction in whole or in part.”

Gambia’s justice minister, Abubacarr Tambadou, said after the ruling that “The fact that judges have unanimously decided that genocide cannot be tolerated and that Rohingya need to be protected is a triumph for international justice.”