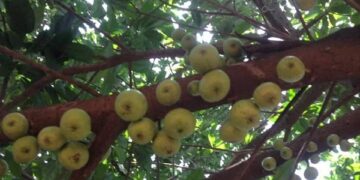 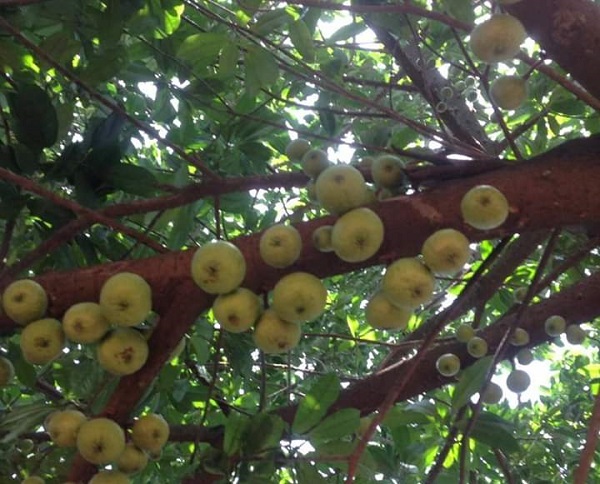 The tree with the fruits. Photo: Twitter/@Ashanti_Kingdom

Ghanaian scientists say the apple tree reported to have started bearing fruits in the Ashanti region of the country is rather one of the species of fig tree.

Many Ghanaians on social media have been reveling in the news that the tree planted five years ago was now bearing apple fruits.

The tree was planted five years ago and has just started bearing fruits, according to local media.

Ghana is not known for growing apple and almost all apple fruits sold in the Ghanaian market are imported.

So with the news of an apple tree planted five years ago now bearing fruits, it appeared to be a story that excited many who hoped Ghana could now consider going into mass apple production.

But a Senior Lecturer at the Department of Horticulture of the Kwame Nkrumah University of Science and Technology (KNUST) told local news outlet Luv FM that after examining the tree and its physical characteristics, it did not come near apple or even pear.

Dr Irene Idan said sample from the tree was examined and proofed to be rather a species of fig tree.

She is quoted as saying that “The leaves don’t resemble that of apples, also the skin of an apple is very smooth but this is rough. When we cut the fruit, its internal formation doesn’t resemble an apple.”

“The apple has thick mesocarp with long peduncle with seeds attached to it and that’ll be sitting in the pericarp. It’s more of a fig than an apple,” Dr. Idan said.

A social media user posted pictures of the apple tree and the fruits on it on twitter and said “Growing up, we were told this tree can only survive outside Ghana but thanks be to God this Apple tree is producing it’s first fruit after five years it was cultivated in WIAMOASE – ASHANTI.”

Growing up, we were told this tree can only survive outside Ghana but thanks be to God this Apple tree is producing it’s first fruit after five years it was cultivated in WIAMOASE – ASHANTI.

It is feasible, you can grow Apple in Ghana 🇬🇭🇬🇭🇬🇭🇬🇭 no need for import.

“Sadly! The young lady who planted the Apple seed died just after the seed started growing, the Apple tree is yielding fruits now for all to see. This is called Legacy! This is the fruit of her labour,” the social media user also wrote.

A live video on the Apple tree. It is true! pic.twitter.com/ltzs5mxC95

Ghana however is well known for producing cash crops like Cocoa, Mango and Cashew, adding Apple could create more jobs for many.

In Africa the top countries that produce and export apple include, South Africa, Morocco, Egypt, Algeria, Tunisia, Libya and Madagascar.

Zimbabwe and Kenya also rank high on the list of countries in Africa that produce apple.