Why Africa Is Poor Despite Having The Most Diamonds 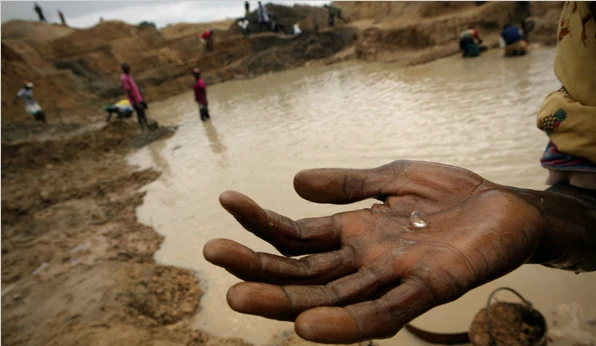 Over the past years, poverty reduction has been accelerating in the poorest countries of the world, but not so fast enough in the so-called continent of wealth, Africa.

According to recent estimates, the number of deprived people in the region has grown from 278 million to 413 million in the last 25 years, while the average skyrocketing poverty rate of 41% makes Africa the poorest of all time.

What’s more depressing is that the continent is blessed with the rarest minerals like diamonds still more than 300 million Africans are living in extreme conditions with daily wage less than $1.90.

While everyone is singing to the tunes of the fresh eight-year-old rapper from Uganda who sings about poverty, there is a lot more we need to know about the continent cursed by diamonds.

Despite the fact that few sub-Saharan nations are showing signs of improvement, most are stuck in scarcity. Read on to know the top ten reasons why Africa couldn’t make it even though it is home to prominent gem-quality diamond producing nations.

Why Africans Are Poor Despite Having Natural Wealth?

Arguably, the world’s poorest continent lags because of modern age colonialism, which severely affects its economic growth and development. In simple words, colonialism is described as an act of practicing full or partial control over another country. The primary purpose is to exercise power and exploit the natural resources of the country so that it cannot grow economically.

This is precisely the case with Africa. The continent has abundant natural resources, including the most precious diamonds, but most Africans are still under the tight control of powerful nations, which hurts the economy. For example, the policies of colonialism forced Africa to rely on imported goods as all the natural resources are drawn away by the wealthy nations.

A critical factor that needs immediate attention is the lack of transparency. Official reports revealed that diamond production in overall Africa is twice as large as projected. The reason: Illegal trade, underreporting of production, corruption, and tax evasion. Initially, the former Prime Minister of Zimbabwe claims that a $15 billion missing diamond revenue story was ‘all lies’.

However, the case is different for Botswana, the dominant role model in Africa. The diamond producer country has a robust governance system that enables the country to channel profits back into the communities. Instead of relying on industry giants, Botswana processes the raw diamonds domestically. The country exports rough diamonds and earn 75% foreign exchange revenue from it.

The wealth is concentrated at the top while the poor people are deprived of necessities like clean water, medical care, and food. This massive gap between the rich and poor has been widened over the years. In Africa, corruption exists almost at all levels of the political system and is the main reason behind slow economic development.

The corrupt behaviour of politicians and government officials negatively the poor people by preventing them from accessing funding, support, and services of government. For example, poor people rely heavily on public services, but they are more likely to be met by demands for bribes for obtaining support.

Increased access to education is believed to be a highly essential component of prosperous nations. The deficit in educational opportunities and instruction quality prevents people from learning and progressing. Evidence also suggests that schooling has a direct impact on poverty. The reason: people with reading, writing, and numeracy skills are more likely to get high paying jobs. Moreover, it equips individuals with the awareness necessary to thrive in a competitive world.

Although Africa is blessed with natural bounties and jewels, the citizens are incapable of making well-thought and informed decisions. Undoubtedly, natural resources are essential for economic development, but education is one of the greatest needs in Africa.

While growth in population causes poverty, there is also a direct effect of poverty on overpopulation. A country cannot experience economic development until it balances both conditions. However, humanitarian and health agencies like UNICEF and WHO have organized several campaigns to educate people on this matter; the birth rate and death are unstoppable. As a result, more people are forced to live in extreme conditions. A report by UNICEF indicates that the population of Africa is expected to be doubled to 2 million people by the end of 2050.

Lack of income does not merely define being poor. Poverty is a multi-dimensional concept that also includes the well-being of humans. In Africa, health disparities continue to rise because of negative socio-economic factors. Lack of education, expensive healthcare services, unhygienic living condition, and lack of essential services means that the diseases spread quickly, and people will be left untreated.

Currently, there are 25 million adults, and 2.9 million children are infected with a life-threatening illness like HIV, Ebola, and malaria. Increasing mortality rates due to diseases are directly contributing to high rates of street youth, another emerging problem of the continent that can fuel crimes, sexual health issues, and psychological issues in adolescents.

The Western-based multinational mining companies are accused of stealing the natural wealth of sub-Saharan Africa. For a long time, these companies have been successfully getting away with tax evasion, environmental pollution, bribery, abusive transfer pricing, forced evictions, and lack of transparency regarding mining rights. Zambia has the largest mines of copper, and yet it is the poorest country of Africa.

The companies over-report the costs and under-report the production, which is led by the provision of tax incentives by the Government of Zambia. Similarly, companies are engaged in illegal capital flight to evade tax. As a result, the country makes a loss of $2billion per year from tax avoidance, which is nearly 10% of the country’s GDP.

Trained and skilled labour is essential for any economy to succeed. Unlike other countries, the population of Africa is made up of a high proportion of unskilled individuals. Lack of education and the inability to get HND assignment help is the main reason. Moreover, poor technological infrastructure and lack of investments in training and development make Africa the home for low-skill people. Despite huge demand, the diamond mines are operated by unskilled personnel, which results in low-quality final products.

The exploitation of human rights is a constant phenomenon that persists in underdeveloped countries, and African countries are no exception. However, human rights abuse is far more significant in the mining sector. Mining firms are also one of the biggest culprits behind severe violations and engaged in unethical practices in the quest for higher profits at the expense of the environment and human health.

The fact that the agencies and government are too weak to regulate these firms makes mining bosses crueller. Mining is a highly dangerous and labour-intensive occupation, but people are forced to work in unsafe conditions. Not only this, but a large population of mining workers also made up of trafficked children who are exploited physically and sexually daily in small mines and quarries.

Business knowledge plays a pivotal role in making economies prosperous and flourishing, but it is a major cause of business failure in Africa. While industrial experts and scholars have recognized the true potential of Africa lead the world, lack of technical knowledge and business understanding, holding back small and medium-sized enterprises. Education is an essential ingredient of economic advancement as it helps countries to inform their policies and make sound decisions for the welfare of the people. Similarly, business-related knowledge is essential for countries to come up with innovative ideas for transforming valuable raw materials into products that can be used to meet the local demands as well as export to foreign countries to earn revenues. In conclusion, instead of more projects and funds, Africa needs more business knowledge to spotlight opportunities and help itself.

What Needs To Be Done?

Now the question is how to fix this? To move forward as a continent and modernize the mining industry, a lot has to be done. The first and foremost that Africa should work on is improving its transparency. Countries need to be more open with their dealing.

At the same time, Governments should play an active role in regulating the mining industry, including the multinational companies that bring investment to the country.

More emphasis on technical education should be placed, such as farming techniques and processing of natural minerals as it would eliminate the skill-gap and enable small companies to come forward and produce export quality products. The profits from selling diamonds should be appropriately used for setting up more branches, improving technological infrastructure, and anti-poverty programs.

Africa, the continent of wealth, is not poor, but it is being managed by people with poor management skills. It’s not about blaming Africa, but it is about diagnosing the problem to find out the solution. More importantly, we need to change the way we talk about Africa.

Opinion: The Nelson Mandela in us all

African countries have lost almost $55 billion in travel and tourism revenues in three months due to the coronavirus pandemic, the African Union (AU)...
Read more
Business

Nigeria’s candidate to head the World Trade Organization (WTO) said she feels “strong support” from Africa and expects African leaders to unite behind one...
Read more