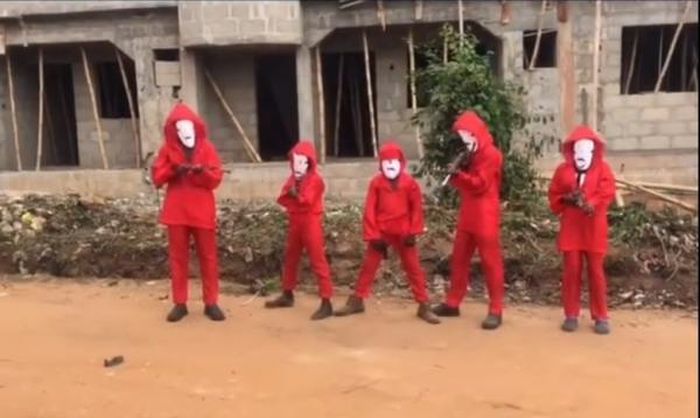 A group of young Nigerian filmmakers who are known for spoofing famous movie scenes are heading to Hollywood.

The group has been praised in recent months for recreating scenes from many movies, that are hilarious.

The Ikorodu Bois this week got the attention of Hollywood actor Chris Hemsworth, who stars in the Netflix film the Extraction.

Hemsworth was impressed with the spoofing of the movie that he has described it as “epic”, leading to an invite to the young filmmakers attend the premiere of the movie’s sequel.

We so much love this movie and we hope @chrishemsworth and @netflix sees this remake, pls retweet ?? pic.twitter.com/x47h9UV9Sz

The young filmmakers were elated to have received the invitation to the next edition of the movie.

This is awesome! We would love to have you guys at the #Extraction 2 premiere…DM us and we’ll get you there! https://t.co/6eufmJMgT7

The group uses homemade objects and local communities for its movie scenes, spoofing all kinds of productions from music videos, TV series, and Hollywood film trailers.

Members of the group include brothers Muiz and Malik Sanni, and their cousin Fawas Aina, who are all under the age of 16.

They’re managed by Muiz and Malik’s 23-year-old brother, Babatunde, who also directs and edits the films.

When your parents said ‘go outside and play’, did you get as creative as this?

Meet the Nigerian Ikorodu Bois, a dynamic comedy group that has caught the attention of top Hollywood stars for their amazing remakes of classic movie scenes. @IkoroduB pic.twitter.com/quqp6Fpftf