The push for South Africa to have a startup act 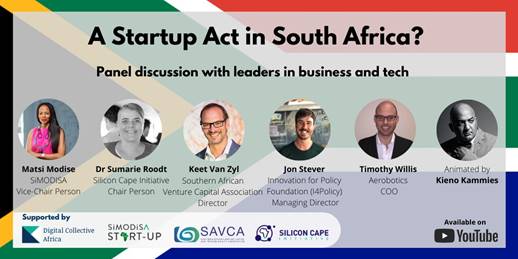 A co-created and tailor-made national Startup Act will be a powerful tool for empowering entrepreneurs and addressing key developmental issues in South Africa, although case studies from other African countries show that it will require prolonged and widespread engagement with various stakeholders.

This was the conclusion reached at the end of a webinar discussion on the relevance of a South African Startup Act held recently by the newly formed Digital Collective Africa, a non-profit amalgamation of investors, ecosystem enablers, institutions, and entrepreneurs from across the continent geared towards supporting early-stage startups.

Speaking at the event, Dr Sumarie Roodt, Chairperson for the Silicon Cape Initiative – a founding body of the Collective – said: “There is clear evidence that Startup Acts create enabling environments for entrepreneurs if all of the relevant ecosystem-related conditions are present.

This includes the presence of scalable and high-growth potential small businesses, willing investors, and nurturing policy. However, the Act should not be considered as the only piece of legislation for business development, but rather a part of a large series of interventions aimed at entrepreneurs.”

According to Stever, the benefits of a Startup Act are making them popular concepts amongst African economies. Startup Acts have already been implemented in Tunisia and Senegal, with Mali, Ghana, Kenya, Côte d’Ivoire, DRC, and Rwanda expected to follow suit this year.

Already, Mali’s cabinet approved a Startup Act that was developed through a co-creation process supported by i4Policy and the World Bank.

Mergers and acquisitions decrease in Africa as Covid-19 hits hard

In Tunisia, the Act is being heralded as a solution to widespread youth unemployment. With roughly a third of all young Tunisians unemployed, the government is using the Startup Act to encourage young people to take matters into their own hands and become novel business owners.

Additionally, the government and World Bank-led Startup Tunisia programme, which is encouraging  the creation and growth of tech startups and digital small businesses, has also allowed for the provision of equity and quasi-equity financing for innovative startups and SMEs.

This is being done through both the Anava Fund of Funds and InnovaTech Fund with the aim of investing in 280 innovative startups and small businesses.

Continues Stever: “The Startup Acts in Tunisia and Senegal are a lightning rod channelling energy towards entrepreneurship, boosting collaboration in the ecosystem and attracting significant additional funding.

The processes to develop the laws were heavily participatory and deliberative, ensuring the laws benefit not just entrepreneurs but the communities and industries around them too. In the case of Senegal, for example, there are clear measures to boost startup success, such as procurement preference, intellectual property support, and funding, but the co-creation process also resulted in revolutionary tax reforms to support all small businesses.”

Van Zyl expanded on the need for the holistic development of a Startup Act: “It is vitally important that this sort of policy is co-developed through the participation of all stakeholders in the greater startup arena, this includes venture capitalists, incubators and institutions, but specifically requires the input of entrepreneurs who are the experts in entrepreneurship.

Here are the 10 most innovative companies in Africa for 2020

By taking this approach, we will be able to properly identify and create the right support structures for the different types of entrepreneurs whose needs will vary depending on their respective size, age, and scalability. For this reason, we need founders and representatives from within the startup space to lead the movement towards a Startup Act.”

Modise concurred saying: “While there is existing legislation aimed at small businesses, we need to understand that SMEs are not necessarily the same as startups. Rather, we need to have a guideline in South Africa for entrepreneurs of young, high-impact and scalable businesses that speaks directly to them.

Most importantly, any such framework must be inclusive, relevant and enactable – this means that startups from all walks of life must be able to see and derive value from it. Doing so will indicate to investors that we are serious about new business development and that we, as a country, know what we are doing.”

Calls for a comprehensive Act to reinvigorate the South African startup scene have garnered more interest recently too as the country’s reputation as a leading environment for startup development in Africa has come under doubt. While funding in Africa has boomed in recent years to new highs, South Africa has, since 2018, seen a decline in funding dedicated its startups as countries like Nigeria, Egypt and Kenya become more appealing to investors.

Some in the audience were concerned that, without government directly in command of the process, a Startup Act would remain a pipe dream in favour of existing legislation, like the Small Business Act.

However, Dr Sumarie Roodt clarified that many of the acts in our Constitution were instigated and propelled into passing by the private sector, although they did require collective action together with the government. “Nevertheless, this shouldn’t prevent us from initiating the process and encouraging government to get on-board.”

Willis agreed that fear of government delays should not deter the development of a South African Startup Act. “Being an entrepreneur in South Africa is a difficult endeavour, but one that is incredibly rewarding for the individual and hugely beneficial for both the larger economy and society. If we want to achieve this, we need to reduce the risk associated with being an entrepreneur – this will allow people to build innovative companies which will in turn help us grow socio-economically.”

From here, the Digital Collective Africa will continue to stimulate the discussion around a South African Startup Act by engaging stakeholders from across the ecosystem in future workshops and webinars, to gather inputs and co-create a comprehensive and value-adding framework for entrepreneurship.

Namibia's government on Tuesday rejected an offer from Germany meant to settle the atrocities committed by German troops on Namibians between 1904 to 1908. The...
Read more
Business

Some bar owners in Zambia are pressurising the government to open bars, despite the rapid rise in Covid-19 Infections. Zambia's President, Edgar Lungu, has been...
Read more
- Advertisement -

The Vice President of Liberia, Jewel Howard-Taylor has been flown to Ghana for health treatment. The government said she was sent to Ghana on Tuesday...
Read more
East Africa