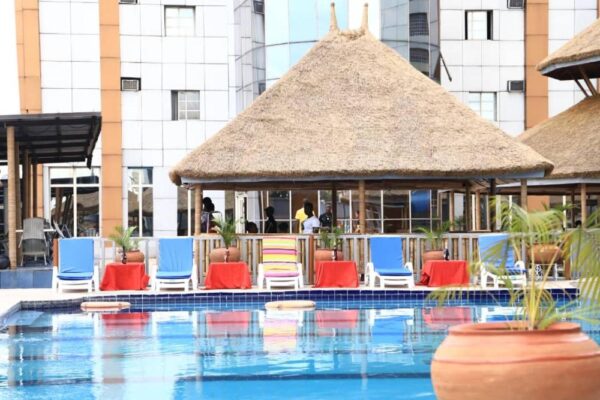 A former Nigerian Minister of State for Education, Kenneth Gbagi has sparked outrage after he was alleged to have ordered that some hotel workers be stripped naked.

Gbagi is reported by local media to have ordered the act to be executed on four employees of the Signatious Hotel, Warri, Delta State.

He chairs the management of the hotel, according to local news media reporting.

The hotel workers – three women and a man – were said to have been stripped naked and photographed.

Their nudes pictures were sent online, attracting outrage from social media users and activists who demanded an arrest and police investigation.

One activist Victor Ojei was quoted by the Punch newspaper as saying that the hotel owner allegedly ordered the arrest of the workers over $12 (N5,000).

According to Ojei the female workers were stripped naked in the presence of the police, who were called in to take them into custody.

He said, “Three females and one man were held hostage, stripped naked in the hotel room, photographed and put on video camera by the management of the hotel.

“Last week Friday, the management of the hotel stripped the ladies naked, filmed them in the presence of the police and at gunpoint. Cash was also withdrawn from the victims’ accounts through their ATM cards, before the police bundled them into a waiting van.”

“The police, who should protect the citizens, connived with the hotel management and dehumanised them. Let’s assume that they stole the money, there are channels to address such matters,” Ojei added.

A street protest was staged with activists, calling on the federal and state governments and lawyers to assist the victims to get justice.

But in a statement, Signatious Hotel, denied the allegations and claims that Mr. Gbagi ordered the workers to be stripped.

“We wish to categorically state that at no time did Gbagi subject any staff of the hotel to such humiliation, as he is presently bereaved and occupied with preparing for the funeral of his sister, who passed away recently.

“The management also wishes to use this opportunity to inform the public that the staff members in the pictures are part of a malicious conspiracy by some political detractors to bring Gbagi’s character to disrepute. This is not the first time an attempt has been made to smear the character of our chairman for whatever reason.”

“In the absence of any dirt to nail Gbagi’s pristine reputation, they have descended to mudslinging by concocting fictitious stories to stir emotions and gain public attention.”