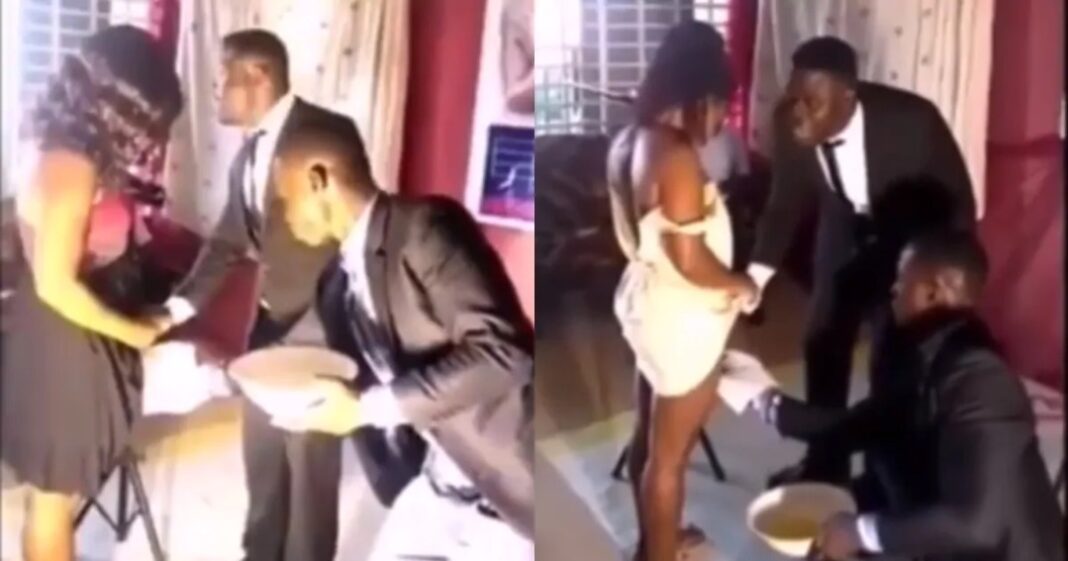 A video of a man believed to be a pastor shaving the pubic hair of women who are supposed to be congregants has sparked outrage among some Ghanaians.

The video shows the man of God asking his female congregants to take off their underwear for him to shave their pubic hair.

He makes reference to the book of Leviticus which instructs Christians to shave their pubic hair for a bath.

The supposed man of God publicly shaves the pubic hair of his female congregants and promises to have them take their bath in accordance with the said scripture.

Scores of women were seen seeing taking off their panties to undergo the spiritual cleansing in the video.

Tell me this is a joke 💔 why why why? pic.twitter.com/dBuCCFAa0s

The said video though according to Africa Feeds checks was part of a TV series produced by the said man of God called Pastor Blinks.

Videos on Pastor Blinks YouTube Channel appear to be portraying some of the happenings within some churches where self-acclaimed pastors manipulate their congregants into actions many deem unacceptable.

Some Ghanaians took to social media to express their disgust about the viral video.

The bible never said the priests should shave the uncleansed. Read it again. Even now because of Christ these practices are no more relevant. Everyone is made whole by accepting Christ.

This is very annoying. The level at which some people get brain washed to fall in for everything their pastors say without thinking twice is something else. Women are mostly victims to such things. 🤦‍♂️

The outpouring of condemnation shows that the public is now better informed to identify and intervene in these things. This may be a clip from a movie but such unethical practices still persist on our continent. We have a responsibility to root it out.

This kind of ppl make others just talk against Christians kwa. How did he even convince dem to take of their dross? Shaving dem with d same machine n collecting them with tissue. What if he uses it for a ritual. What’s wrong with some Christians