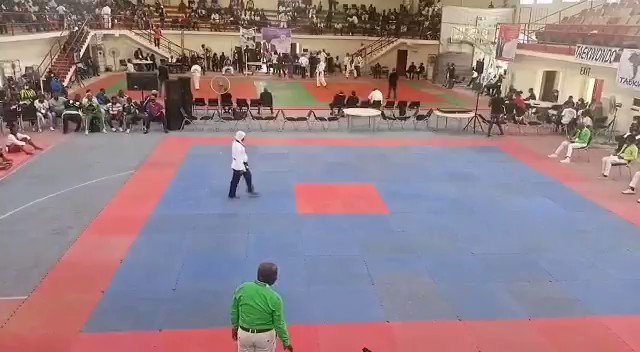 A heavily pregnant Nigerian Taekwondo athlete has received a lot of public attraction for winning a national gold medal at a sporting event.

Idrees won the medal at the National Sports Festival held this year in Edo state, Nigeria.

She and her partner Roqeeb were representing Lagos at the tournament.

Here is a video of her in action shared on Twitter by the National Sports Festival.

An inspiring outing by heavily pregnant Aminat Idrees who won a gold medal for Lagos at the ongoing National Sports Festival in Benin, Edo State.

Aminat Idrees who is 8 months pregnant won gold in the Mixed Poomsae category in Taekwondo pic.twitter.com/rr4fxJCfMs

She also won Silver in the female team Poomsae category and an individual bronze in the same category making her one of the leading medalists at the festival.

She also won Silver in the female team Poomsae category and an individual bronze in the same category making her one of the leading medalists at the festival. pic.twitter.com/j3EiAXSIlF

Poomsae, the category she won is a sequence of movements made up of the fundamental elements of Taekwondo.

Social media users have been reacting to the news.

If you are seeing this and you going about how strong a woman is, you is a fool
The organizers that allowed this happen are mad
The woman herself is mad and she needs someone to tell her
What in fucks name is she trying to prove
There is breaking the barrier and then stupidity

This is how they get themselves into problems and stress maternity staff for preventable problems.

Poomsae is a set sequence of movements that consists of the various fundamental stances, blocks, punches and kicks logically arranged in a meaningful order in response to attacks from multiple imaginary assailants

8 months pregnant in a combat sports.. it can only happen in this part of this world.