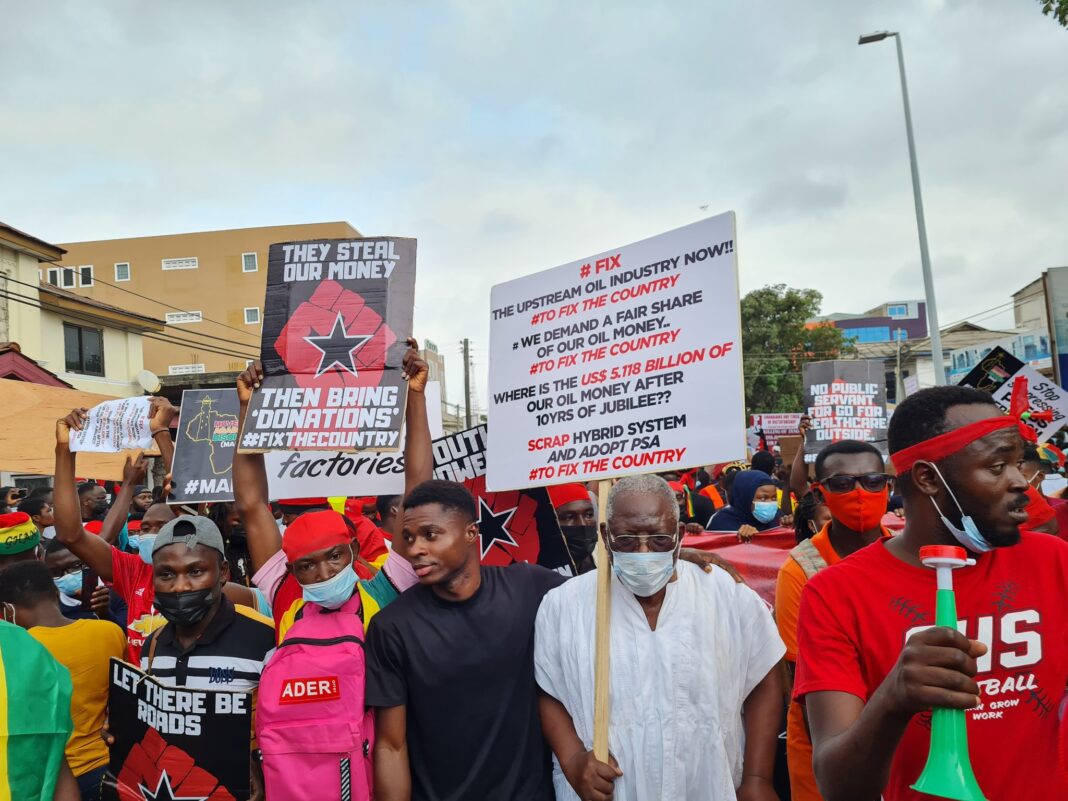 Thousands of Ghanaians mainly young people on Wednesday staged a street protest, demonstrating over the state of the country’s economy and general state of development.

What started as a social media campaign months ago with the hashtag #Fixthecountry, has now become a major movement led by young people.

Wednesday’s protest lasted for over four hours with protesters holding placards that read “dishonesty and lack of patriotism gave us year of no return”, “Ghana is most religious but most corrupt country” among others.

Young people in Ghana stage a street protest in the capital, Accra asking for the country to be fixed. They are unhappy with the total state of development and want better governance from their political leaders. #FixTheCountry #Ghana pic.twitter.com/qP912ICYLg

One protester told Africa Feeds that the problem in “is corruption. I spoke of nepotism, when politicians come to power, they put people who are capable into power rather they put their family members into power.

This cannot happen. As we are talking now, Ghana has over 5,403 schools under trees in this 21st century and now we are going for loans to buy cars for MPs in parliament.”

“All the time the politicians will tell us for the youth you have to be entrepreneur, you have to garner the entrepreneurial skills, more over as aged as they are 70 years, 75 year old people they would be looking for appointments in government portfolios,” another protester said.

The protesters are demanding for better governance and want the government to create jobs for the youth, end corruption, provide basic essential social amenities as well as an efficient and effective health care system.

Issues related to the state of education and lack of quality infrastructure in the area of roads among others are key on the list of demands by these young people.

The protest and its impact has been trending on social media as well.

This is the only hashtag that matters today #FixTheCountry @JustNanaAma pic.twitter.com/YtKtq7JLWI

It’s all the elderly men and women marching with us for me. ❤️?#FixTheCountry pic.twitter.com/A3n358NagR

In Ghana, the politicians’ response to bad roads is to buy Land Cruiser V8. If you can’t afford one, God help you. This is the road that leads to my hometown Tumu. I dread going home. It’s a treacherous journey. #FixTheCountry pic.twitter.com/N3eCZrHar1

The young people now want to replicate Wednesday’s protest across the country in other regions and communities.

“The youth of Ghana have come out in their thousands. Absolutely incredible. This is a show of power that has never been seen in this country. The next stage in all of this is to move out of Accra and go into the communities, and go into the regions.

This is going to be a national campaign that will completely transform this country in favor of young people,” Hady Yakubu, one of the protest leaders told Africa Feeds.

It is yet to be seen how the political leaders of Ghana will react to these concerns from the protesters.