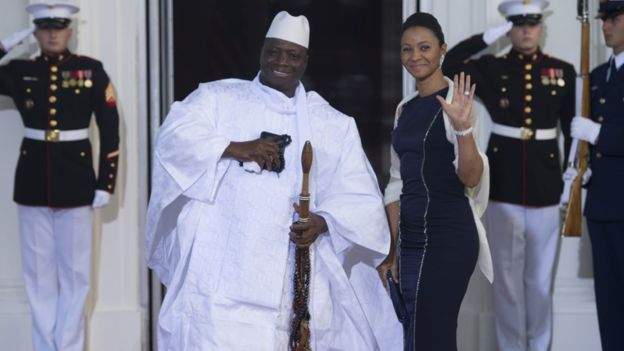 The Gambian government is cooperating with several governments around the world in tracking and recovering Jammeh’s properties.

Yahya Jammeh picture with Zineb Yahya Jammeh, one of his two wives, in 2014. Photo: GETTY

The government of Gambia has announced that it will be seizing all assets belonging to its former leader, Yahya Jammeh.

The country’s Minister of Justice Abubacarr Tambedou made the announcement on Wednesday.

He revealed that the government has order to seize Jammeh’s properties both home and abroad worth over $20 million (a billion of Gambian dalasi.)

A commission of inquiry set up to advice on what to do with assets belonging to the former leader completed its work weeks ago.

A report from the commission has now been submitted to the president Adama Barrow for action.

The Justice Minister Tambedou said his ministry is taking all measures to advise the president on the report, adding that Jammeh’s seized assets include both developed and non-developed assets.

He also mention that the Gambian government is cooperating with governments around the world in tracking and recovering Jammeh’s properties.

Tambedou emphasized that the Gambian government needs to work together with other governments to make sure they recover most assets of former President Jammeh which he concedes will be a difficult task.

He said “Let’s remember that assets recovery efforts outside Gambia are not unfortunately within our control. They are on foreign territory and are subject to foreign laws.

Justice Minister Tambedou warned commercial banks not to tamper with the accounts of the ex-president or his close associates.

Assets of Muhammed Bazzi a close associate of Jammeh were frozen earlier this year.

A court order for more seizures has been made with Minister Tambedou disclosing the decision to take over “all movable and immovable assets including, developed and undeveloped landed properties shares and other acquisitions by former president Jammeh upon the expiration on 17 June 2019 of the freezing order of the High Court”.

Also on the list of businesses to be taken over by the state are “all movable and immovable assets, including developed and undeveloped assets… shares and other acquisitions by Muhammed Bazzi, a close associate of former president Jammeh”.

Already there have been plans to auction cars and luxury planes of former leader, Yahya Jammeh via online.

Jammeh reportedly left behind five planes and 30 luxury cars including Rolls-Royces and Bentleys.

On the tarmac of Banjul airport, one can find a Boeing 727, a Bombardier Challenger 601 and a Soviet-era Ilyushin Il-62M painted with the words “Republic of the Gambia”.

All these planes are now covered by a thin layer of dust.

The government is hoping to raise money from the sale of these assets and chooses to do so online. A date for the sale is yet to be decided.

Already a Truth, Reconciliation and Reparations Commission (TRRC) of Gambia has started hearing stories of witnesses as it investigates happenings during the Jammeh era.

There are eleven commissioners who are hearing the stories of witnesses. They hope to document the scale of the abuses by October 2020.

More than 1,000 witnesses are expected to testify and those include journalists, campaigners, and politicians.

The commission’s ongoing work was initiated by current President Adama Barrow who defeated Yahya Jammeh in the 2016 presidential election.

Over the next two years, the commission members will investigate the origin of the coup Jammeh carried out in 1994 and his subsequent actions while in office.

The 11-member commission can make criminal referrals with many victims hoping Jammeh returns to Gambia to face trial for the abuses it investigates.

He is currently in exile in Equatorial Guinea. The country’s President Teodoro Obiang has vowed to ensure that Jammeh isn’t extradited to Gambia.

Jammeh ruled the West African country for 22 years. He was forced out of office in 2017 after he lost the 2016 presidential elections to current leader, Adama Barrow.

Gambia’s President, Adama Barrow is currently struggling to rebuild the broken economy of the country. This is due to its debt stock with many of the borrowing sanctioned by Jammeh during his tenure.