Covid-19: 99% of Italian patients who died had existing illnesses 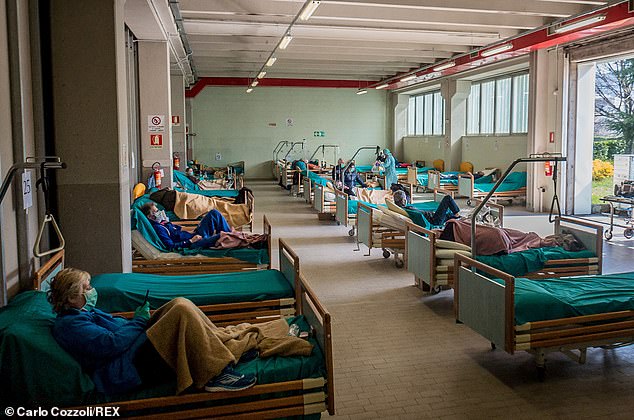 99 per cent of coronavirus deaths in Italy are patients with existing medical problems, a study by the country’s health service has found.

Research into 355 deaths found that only three of the victims, 0.8 per cent, had been clear of illnesses before they were infected.

Nearly half of them – 48.5 per cent – already had three or even more health conditions before they were diagnosed with Covid-19.

The research by Italy’s National Institute of Health is consistent with previous findings that people with existing illnesses are more likely to die from coronavirus.

According to the study, the most common of these problems in Italy include high blood pressure, heart disease and diabetes.

Some 76.1 per cent of the patients who died of Covid-19 had previously had problems with high arterial blood pressure, the study found.

More than a third – 35.5 per cent – had diabetes, while 33.0 per cent had suffered from ischemic heart disease.

Scientists have not yet established why people with high blood pressure are more vulnerable to the coronavirus.

The Centers for Disease Control and Prevention in the U.S. says it needs ‘more data to become available’ to investigate the link properly.

The illness is common and often life-long – around 16million people in the UK and 78million in the US have the condition and many take medication to control it.

It is not clear whether high blood pressure directly raises the risk of fatal COVID-19, or whether it simply pops up so often because it’s so common among the elderly, who are already the most likely to die on account of their age.

For example, between 72 and 80 per cent of over-75s in the US have the condition.

According to a study in the journal Immunology Research, high blood pressure causes low-level damage to the insides of blood vessels and the damage stimulates a small response from the immune system meaning that, when it has to respond to a real threat like a viral infection, there is a greater risk of it overreacting.

Immune overreaction can lead to sepsis or organ failure, which are often fatal, and are known to be a cause of death among coronavirus patients.

Another theory, posed by scientists who wrote in the Lancet Respiratory Medicine Journal, suggested that people with high blood pressure may produce more of an enzyme which allows the coronavirus to stick to cells and cause a worse infection.

This could be because they are genetically more likely to make that enzyme because of the condition, or because they take medications which force their body to produce more, called ACE inhibitors or ARBs.

That theory has not been proved and doctors warned people not to stop taking any medication they have been prescribed.

A critical care expert working in Beijing, Du Bin, told Bloomberg: ‘From what I was told by other doctors and the data I can see myself, among all the underlying diseases, hypertension is a key dangerous factor.

‘Though there is no research published on that yet, we believe hypertension could be an important factor in causing patients to deteriorate, leading to a bad prognosis.’

The Italian study also found that the average age of people who died from the virus in Italy was 79.5, although it was slightly higher for women than men.

That is also consistent with previous findings from around the world that older people are more vulnerable to the disease.

Italy’s population is the second-oldest in the world, after Japan’s, and the country has suffered the worst outbreak in Europe by far.

The study found that 77 per cent of the patients who eventually died were suffering a fever when they were taken to hospital.

Health experts say the fever is one of the main symptoms of coronavirus, along with a cough and shortness of breath.

However, 5.2 per cent of patients who later died did not initially present any symptoms when they tested positive.

Italian prime minister Giuseppe Conte today ordered the country’s national lockdown to continue past its original deadlines, some of which were as soon as March 25.

Italy recorded a record 4,207 cases and 475 deaths yesterday, scuppering hopes that the quarantine was starting to stall the rate of infections.

Italy’s National Research Council (CNR) says it expects a ‘significant reduction’ in the growth rate of new infections in the Lombardy region by next Tuesday or Wednesday.

The northern region of around 10million people has been at the epicentre of the crisis since the start, reporting two thirds of all the deaths in the nation of 60 million.

It has been under lockdown since March 8.

Noting that infections are starting to rise in the south, where many Italians moved after the start of containment measures in the north, the CNR predicts that figures across Italy will only stabilise between March 25 and April 15.

There have been fears that the health system of the poorer south would be entirely unable to cope with an outbreak on the scale which the north has suffered.