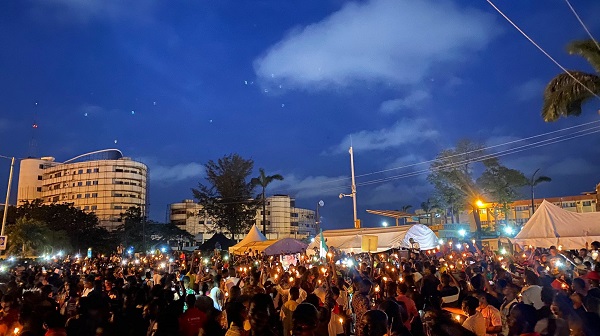 Thousands of Nigerians on Sunday gathered across the country to hold a vigil to remember those who were killed by members of the Special Anti Robbery Squad (SARS).

The notorious police unit has been accused of brutality and human rights crimes, sparking protests.

Members of the SARS unit were accused of committing extrajudicial killings and torture.

Protests over recent killings carried out allegedly by some of the members of SARS have received support globally.

The decision by the government to disband the unit did not even appease citizens but rather further ruffled feathers among some Nigerians.

Thousands of Nigerians have been outraged over the unveiling of a new unit to replace the SARS.

The new Special Weapons and Tactics (Swat) is to carry out the duties handled by the unit which was disbanded after days of protests.

Nigerians contend that the changes are not good enough to reform the Nigerian police service.

Protests have continued for days spreading across the country with reports of brutalities from armed men and in some cases police officers.

The vigil was held in Nigeria and across the world for the victims.

Anyway, our Candlelight Vigil was so beautiful. We are learning from you guys out there in Abuja. Thank you for showing us what it means to feel.#EndSARS pic.twitter.com/LS0qnuDXb1

Candle Lit Vigil in London for the victims of police brutality in Nigeria. Rest In Peace to the fallen. 🕯🙏🏾🇳🇬 #EndSwat #EndSars pic.twitter.com/s1lC3Lf5s6