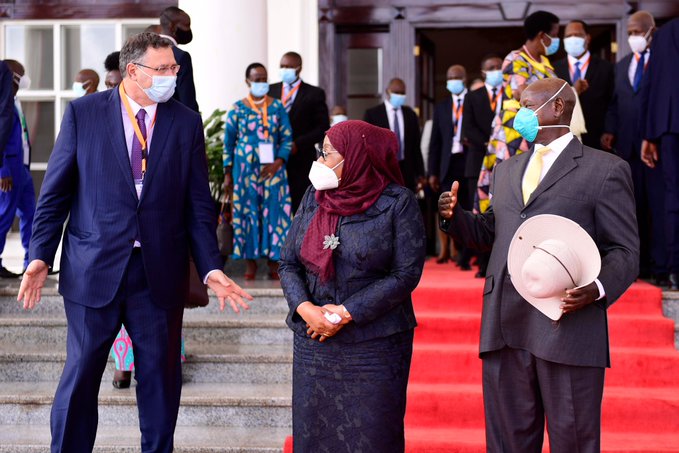 The governments of Tanzania and Uganda on Sunday signed a long awaited oil deal with international oil firms—French Total E&P, and China’s Cnooc.

The deal worth some $3.5 billion gives way for the commercialization of an East African Crude Oil Pipeline (EACOP).

Officials of both countries and the oil firms have been engaged in years of protracted negotiations.

This new deal now allows for the oil project for the next phases of development and production by earliest 2025.

The 1440km export pipeline stretches from Western Uganda to the Tanzanian Indian Ocean Port of Tanga.

The pipeline project will be the longest heated oil pipeline in the world.

Tanzanian President Samia Suluhu Hassan visited Uganda for the final stages of the negotiations and signing of the deal.

Total SA is the parent company of Total E&P licensed to operate in Uganda, alongside Cnooc.

The two ventured into Uganda after each acquiring 66.66 per cent stake from Anglo-Irish Tullow Oil PLC, which recently sold off its entire stake, and is currently processing winding up its operations.

President Yoweri Museveni said the deal was “It has taken long before the first oil, due to divergent perceptions between us and the oil companies.”

It has taken long before the first oil, due to divergent perceptions between us and the oil companies. Initially, I did not favor the idea of the pipeline. My question was: “Why export the oil. Don’t the East Africans need it?” In this, I preferred an Oil Refinery only. pic.twitter.com/EwcJZmQshP

The agreements signed includes two separate Host Government Agreement (HGA) between Total E&P, and the governments of Uganda and Tanzania.

The others are the Shareholders Agreement (SHA) between the four shareholders in the EACOP holding company.