Over 500,000 people have been infected but majority have also recovered.

The world has been brought to a standstill following the outbreak of the deadly coronavirus since last December.

The virus was first reported in China’s Wuhan city but it has since spread all over the world including Africa.

Africa has over 400 cases with 8 deaths so far as at least 30 countries on the continent report of the virus.

What has hardly been told about the virus is the stories of survivors. There stories could help allay fears and reduce the panic across the world.

One survivor from the UK, Dr Clare Gerada, 60, a General Practitioner in Lambeth, South London, and former chair of the Royal College of GPs has been sharing her story.

Just a little out of sorts was how I felt at first. Initially, I thought I probably had a bit of jetlag.

Three days previously I had flown back from New York, where I’d been attending a psychiatry conference.

As I left for home, New York declared a state of emergency because of the coronavirus and I felt relieved that I was escaping — I even went to the airport four hours earlier than I needed to, I was so eager to get home.

I didn’t really know what ‘a state of emergency’ meant, and I was worried they might stop the flights.

I arrived back on a Sunday morning and went to work on Monday.

By Tuesday morning, though, as well as feeling rather tired, I had started with a new dry cough. Yet it was so mild to begin with, I barely gave it a second thought and put it down to the ‘cabin cough’ you sometimes get after a long flight.

Soon after that, though, I quickly developed a terrible sore throat. I know some people say you don’t always get a sore throat with corona, but I did — it felt as if someone had put knives in my throat. And then the high temperature hit. I was feverish and got the shakes.

It was then I began to think: could it be coronavirus? I think I knew it was right away — but, strangely, I didn’t feel scared, as I have no underlying health problems. I’m fit and I walk a lot.

I realised going to work was out of the question and I looked online for advice, as I’d been out of the country for six days and things had moved on rapidly in that time. Even I wasn’t sure what the latest guidance was.

So I emailed 111. When I didn’t hear back, I went to a testing pod at a local hospital.

At first they weren’t going to send me for testing, as at that time the U.S. wasn’t one of the countries this was advised for. But I explained that New York had declared a state of emergency and it was endemic there.

I knew it was the coronavirus, as I am never normally ill and the flu season was all but over — plus I’d had my jab.

And this was obviously more than a cold. Within hours of getting my first symptoms I wasn’t able to eat. I went for two days with no food at all, as I had no appetite and also had a horrible metallic taste in my mouth which made food taste unpleasant. Eating felt like too much effort.

I collapsed into bed and had very fitful sleep because of my high temperature, but I forced myself to drink a lot — lemonade and bitter lemon. I couldn’t drink tea because my mouth and throat were so sore.

Within hours my nose became full of ulcers and I imagine the back of my mouth was the same.

All I wanted to do was sleep — I’d considered keeping a video diary, but even the thought of a holding a phone seemed too much.

I rang my husband, Simon, he came home from work and we kept a safe distance from each other. He slept in the spare room, I put all my crockery in the dishwasher and we didn’t share towels. So far he hasn’t been ill, though he has stayed in the house. A neighbour has been walking our dog.

I had flu 15 years ago and it was nothing like this, I was only ill for half a day. Having coronavirus was the worst I have ever felt. For the following few days, pretty much all I could do was sleep — I’ve never slept so much.

On Friday, the hospital rang with my test results: it was coronavirus. I wasn’t scared, as by this point I was already starting to feel better; my temperature had come down, the cough had gone and I didn’t need paracetamol any more.

I could eat again, too, though not a lot. I think I managed a bowl of chicken soup on Saturday, and by Sunday — a week since my return from New York — I was eating stews and soup brought round by neighbours.

Luckily, my husband is well and no one else I have come into contact with in London has fallen ill so far.

Yesterday I felt so much better. I just wanted to go out, so I stood on my doorstep with a mask on to get some air. 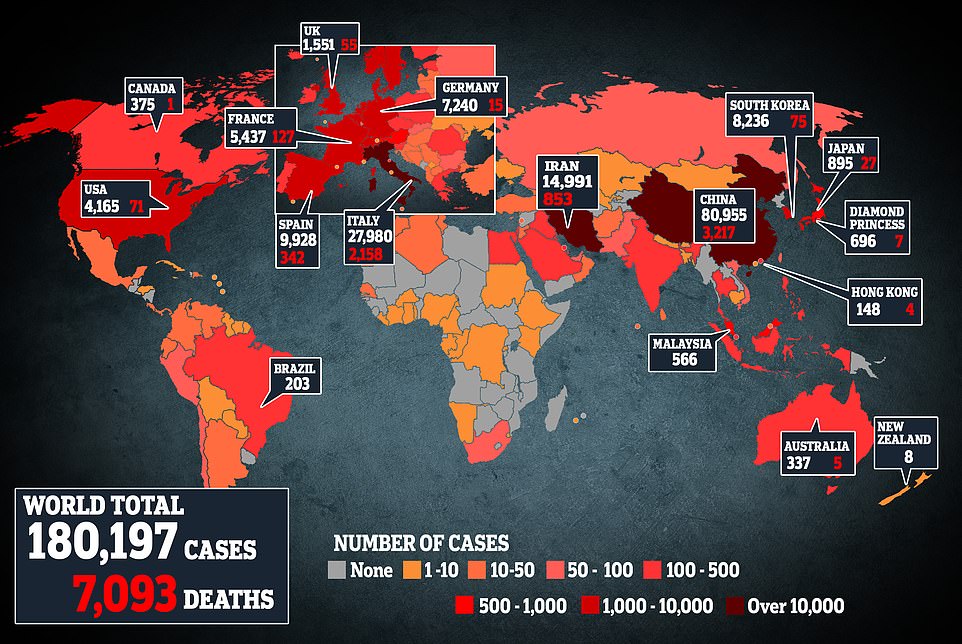 Most people have been very sympathetic but fascinated when I’ve told them I have coronavirus.

They have asked me lots of questions, as none of them seems to have met someone who’s actually had it, as yet.

During my 35 years as a doctor I’ve seen some scary things, including a meningitis outbreak and cases of SARS. But corona is scarier in terms of its impact on society and the economy.

I was told I could stop self-isolating five days after I started to feel better, but I am staying at home all this week to make sure I don’t infect anyone else. I will return to work next Monday.

Clearly, it is a grim disease with a higher mortality rate than ordinary flu, though I’ve heard of some people who experienced such a mild illness they didn’t even realise they had it.

We are all fearful of it because we don’t know what it’s about. But for me it was just a seven-day illness, which I believe is most people’s experience.

My 60-year-old body has fought a defence against a new virus. It has summoned my antibodies — if you took a sample of my blood now, it would be full of them — and protected my lungs, heart and kidneys against attack.

I am through it, and all I have to show for it is a slight sore throat and some ulcers in my nose that haven’t yet healed.

The vast majority of people who get this virus will win the battle against it. Those dying are the ones with underlying health conditions, where the respiratory problems get too much.

I’ve heard it said that this isn’t much comfort to the people with underlying illnesses. But it is, because it means most of us can keep away from hospitals and leave the beds there for those who are really sick.

For the majority, coronavirus is bearable. As I hope my experience shows, it is not something most of us need fear.

Nigeria records new coronavirus case after 4 days without a case