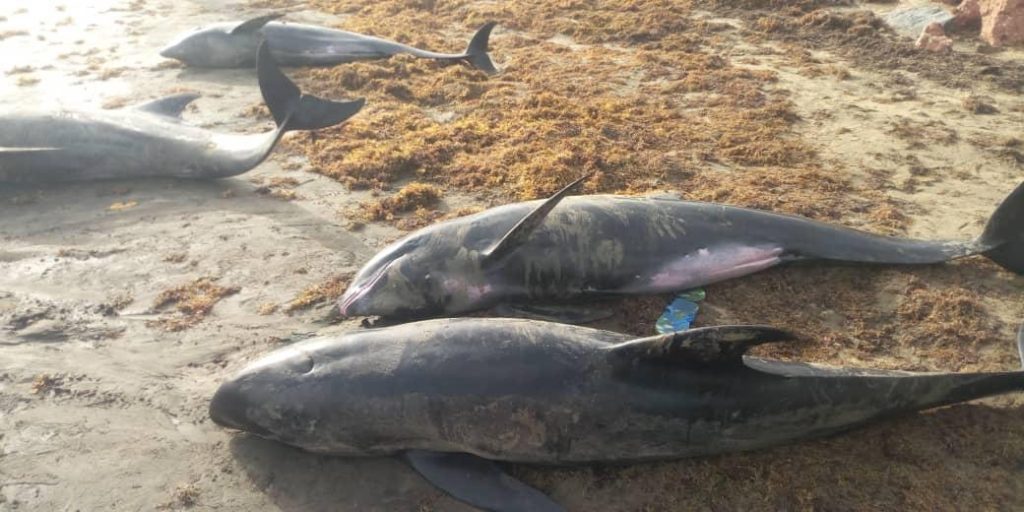 More than 60 dead dolphins and tonnes of different species of fish have been washed ashore along the coasts of Ghana.

In Axim-Bewire in the Western Region, over 60 dolphins were washed ashore on Sunday, April 4, 2021.

Prior to that discovery, tonnes of large species of fish have also been spotted in Osu in the capital Accra and Keta in the Volta Region.

Environmental officers have taken samples of the species of dead fish and sea mammals to the laboratory for analysis following suspicious that they did not wash shore alive but dead.

Reports say the Environmental Protection officers are also having a tough time preventing members of the public from consuming the fish or having close contacts with them.

At Axim-Bewire, in the Western Region, all 60 dolphins have gone missing from the shore, since the processed dolphin is said to attract very high price in the market.

The Marine Police Unit of the Ghana Police Service and the Fisheries Commission are also collaborating to prevent consumption of the dead fishes following suspicious that some have already found their way into the market.

In a statement the government’s fisheries ministry said “Initial observation of the fishes showed no wound /lesions on their bodies.

It is to be noted that after two to three days of death of an animal pathological signs change. Samples of the fish were collected on ice to be examined critically in the laboratory.”

There have been reports of possible oil spillage but the statement said “The seawater samples collected will be analysed for physical, chemical and other biological parameters.

The colour of the sea and temperature are normal. We assure everyone that we are working hard to ascertain the actual cause of mortality of the fish.”

Man catches Fish worth $2.6 mln but eats it with villagers